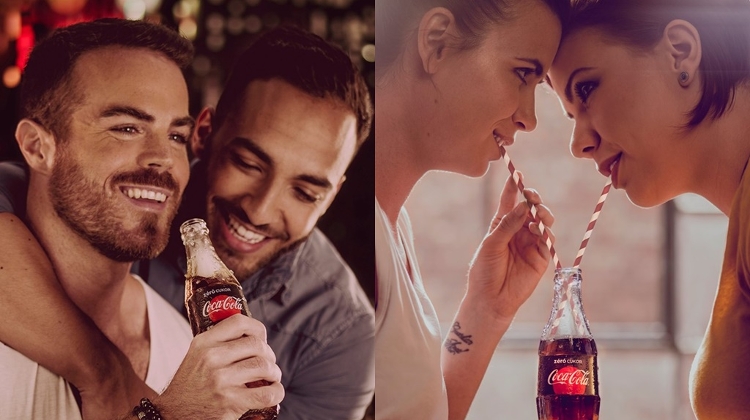 A pro-government columnist accuses the Coca-Cola company of popularizing homosexuality with the aid of advertisements displaying gay people.

A left-wing commentator finds such accusations absurd, and accuses the government and its intellectual hinterland of homophobia.

The Coca-Cola company has placed ads in Budapest metro stations with hugging same sex couples. The company said the posters are intended to support the motto of the Budapest Sziget Festival (‘Love Revolution’).

The Coca-Cola company also explained that it supports gay marriage and the equality of homosexuals. Some government politicians protested against the ads, while left-wing and liberal MPs endorsed the message on the billboards.

In Pesti Srácok, Botond Bálint accuses the Coca-Cola company of popularizing homosexuality rather than the toleration of gays. In the pro-government commentator’s interpretation, the company wants to suggest that homosexuals live a happier and free-er life than heterosexuals.

Bálint claims that the ads therefore violate Hungarian laws as their primary targets are teenagers. In a passing remark, Bálint suggests that some unnamed groups want to use the Coca-Cola brand to popularize their ideas.

168 Óra’s Zoltán Lakner, on the other hand, suspects that the uproar over what he sees as modest and moderate ads is intended to help strengthen the government’s homophobic messages.

The left-wing political analyst, who came out as gay a couple of years ago, finds it absurd to suggest that the posters depicting homosexuals will make young people gay. Lakner claims that those who want to contain pro-gay public messages want to limit the right to a free life.