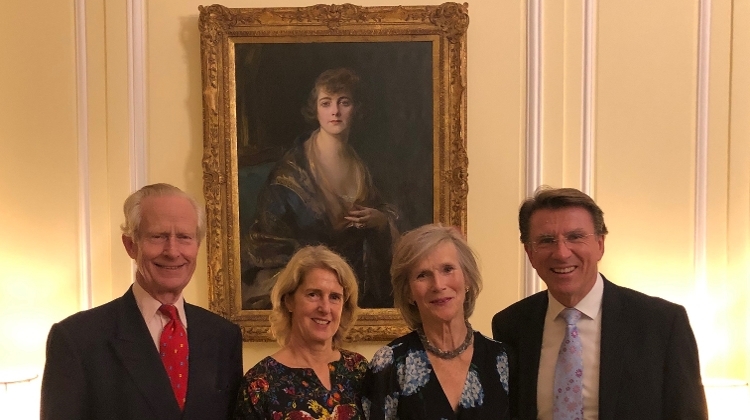 Two portraits by world renowned Hungarian – British artist Philip de László have returned to Budapest thanks to the British Government Art Collection that successfully bid for the paintings at the spring 2019 auction at Christie’s New York.

Photo: (from left to right) Mr Damon de László, one of the artist’s 17 grandchildren; Ms Penny Jones, Director General of the Government Art Colelction; Ms Sandra de László, wife of Damon and Head of the De LÁszló Catalogue Raisonné; and Ambassador Lindsay, holding the De László Medal of Excellence he was awarded by the De LÁszló Foundation.

The paintings, depicting former Hungarian Foreign Minister Tibor Scitovszky and his wife Hanna Hódosi, were rehung on Wednesday in their original places in the couple’s former villa, now the British Ambassador’s Residence in Budapest.

The two portraits are regarded as among the finest by Philip de László who painted them in Paris in 1927. Following a successful bid by the British Government Art Collection (GAC), the paintings have now been brought back to Budapest.

Coinciding with the 150th Anniversary of Philip de László’s birth, and the opening of the first solo exhibition of his work at the Hungarian National Gallery in nearly a century, the Scitovszky portraits, in perfect condition with their original frames, were hung on Wednesday in their original positions in the Salon of Villa Scitovszky, 73 years after they were taken down.

“I am delighted and proud to see these exquisite portraits returning to Budapest. These artworks represent the very best of fine arts in both Hungary and Britain, due to their painter, Philip de László, who called himself ‘an artist of the world’, and whom we can certainly regard today an artist of both Hungary and Britain”  ̶  British Ambassador to Hungary Iain Lindsay OBE says.

The paintings are going to be displayed at the British Residence in Budapest. In order to enable Hungarian art enthusiasts to see the portraits, and in line with the GAC’s commitment to ensuring public access to its art collection, the British Embassy plans to open the Residence to the public on designated occasions in the future.

Having been taken to the United States by the Scitovszkys in 1946 when the couple left Hungary, the paintings were first donated by the family to a Hungarian Benedictine School in the USA, from where they entered various private collections, were later auctioned at Sotheby’s New York in 1993, and finally, they turned up as auction lots at Christie’s in New York in April 2019.

The British Government Art Collection were alerted to the portraits by the Hon. Mrs. Sandra de László, Director and Editor of the de László Catalogue Raisonné. By agreement with the Foreign and Commonwealth Office, the GAC bid for the paintings with the intention that they be returned to their original home in Budapest.

The story of Villa Scitovszky:

In 1925 the Scitovszkys built a villa in neo-baroque style in the hills of Buda. Much of the antique furniture was acquired from France by Madame Scitovszky.

When the couple left for the United States in 1946 they leased the villa to the British Government for use as the residence of the British Legation Head. It was expropriated by the Hungarian State after the family decided to remain in America, and the British Government continued to lease it until they purchased it in 1968. It is now the British Ambassador’s residence, with the antique furniture still in use as well.

Exhibitions of the pendant portraits prior to 1946:

Literature on the Scitovszky Family:

The son of Tibor and Hanna Scitovszky, Tibor Jr., became a renowned economist in the US. He published a book entitled “The Memoires of a Proud Hungarian” which was also published in Hungarian in 1997 (Egy büszke magyar emlékiratai, Közgazdasági Alapítvány, Budapest).

Within the Department for Digital, Culture, Media and Sport, the Government Art Collection (GAC) promotes British Art (from the 16th century to contemporary) by placing artworks in government buildings worldwide, making it the most dispersed collection of British Art in the world.