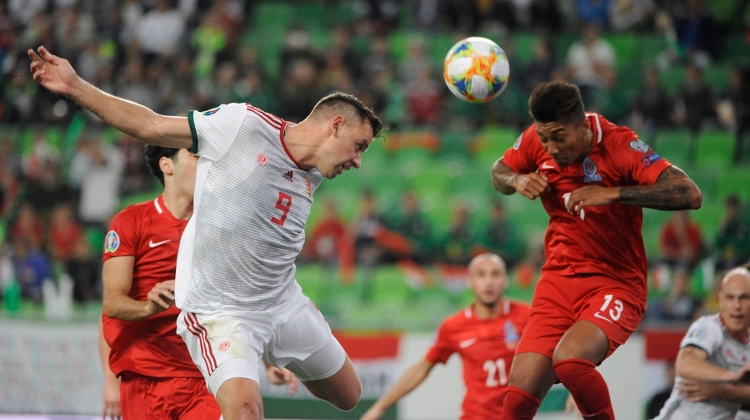 Korhut's maiden international strike was the only reward Marco Rossi's men had for an evening of almost total dominance against their qualifying group's bottom team but a succession of missed chances maintained Azeri hopes and only a disallowed goal in the dying seconds of the match ensured the hosts would breathe new life into their UEFA Euro 2020 dream.

The atmosphere created by the 15,300 children at the start of the match, one has to admit, was both refreshing and spectacular, the higher tones of encouragement and constant vuvuzela drones (at least until half-time when the crowd was asked to desist from the latter) providing an unprecedented backdrop to any Hungarian men's match in this correspondent's memory.

Hungary were dominant from the outset, Vida's through pass in the sixth minute finding Szoboszali free in front of the Azerbaijan goalkeeper Emil Balayev who was stranded having ill-advisedly rushed out of his goal, but the Salzburg attacking midfielder could only scoop his attempted lob high over the crossbar from 17 metres.

Soon, Szalai was to control the ball and set up Balázs Dzsudzsák for a low effort which was blocked on the edge of the Azerbaijan penalty area. Captain Balázs Dzsudzsák then found left-winger Roland Sallai with a raking cross-field pass but his cross evaded his teammates and from the resultant clearance, Máté Vida saw his precise, curling effort tipped over the bar by an alert Balayev.

The pressure was about to tell on the visitors though, albeit from an extremely unlikely source. Dzsudzsák's tenth-minute, inswinging, right-wing corner had been cleared by the head of Pavlo Pashayev but left-back Korhut was perfectly placed 30 metres from goal to sublimely volley the ball low into the right side of the Azeri net, his celebratory imitation of an archer firing a bow and arrow topping off a real champagne moment for the Aris Salonika left-back who had scored his first international goal on his 21st appearance.

Dzsudzsák then saw his vicious half-volley in the 19th minute blocked after neat inter-play involving Szoboszlai and Szalai, and Sallai's deflected drive was well-gathered by Balayev as Hungary pushed for a two-goal cushion. Kovács' right-wing cross was anticipated by Sallai ahead of a leaden-footed away defence but having nipped into a great position, he could only half-volley a difficult shot wide of the left post.

The hosts were totally in control. Just after the half-hour mark, Szoboszlai dummied the ball for the arriving Sallai at the back of the penalty area but his high effort was easily caught by Balayev.

A moment later, Freiburg winger Sallai jinked his way to the left byline but there were no teammates to tap in his pass across the goal just two metres out. The final act of a one-sided first half came when Dzsudzsák's clever, dinked pass found Szalai all along eight metres out but with his back to goal, he opted to head the ball hopefully towards Sallai and the chance disappeared.

Would Hungary live to rue all these missed opportunities? The pattern of the match showed no signs of changing in the second period, a foul by Richard Almeida on Kovács giving dead-ball specialist Szoboszlai the chance to replicate his fine goal against Slovakia in September but his typically elegant, curling effort flew a metre over Balayev's bar.

Kovács's shot from a half-cleared Dzsudzsák corner was blocked by a desperate, massed Azeri defence, Sallai blazed high and wide after Szoboszlai had pressured the Azeri keeper into a mistake and Dzsudzsák saw yet another shot blocked as Rossi's charges turned the screw. Remarkably, thirteen minutes from time, it was Korhut who unleashed another superb low shot from distance but this time it sped just the wrong side of Balayev's left post.

A raft of substitutions had taken much of the sting out of the game but with just one goal in it, there was always the capacity fr late drama and it duly game when Bahlul Mustafazade bundled the ball into Hungary's net following an added-time corner, only for the referee to judge the defender had handled the ball. It was therefore Hungary who took all three points to lift the country into second position in their qualifying group with one match left, away in Wales in November.