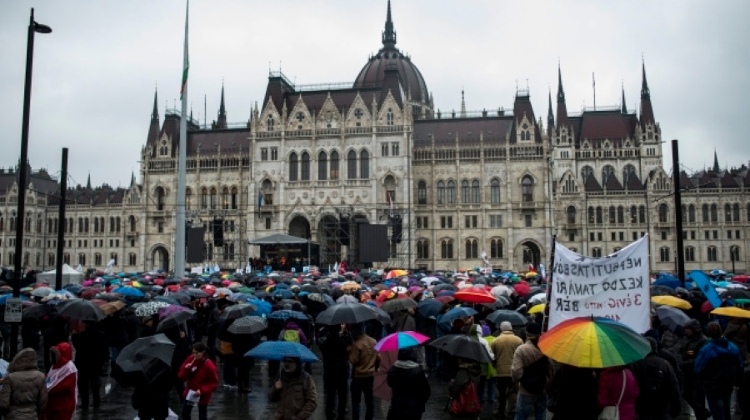 Teachers’ trade union PSZ held a large demonstration in Budapest on Saturday, with support from other teachers’ unions, demanding higher wages and a reduction of the burden on teachers.

Participants who gathered in front of the Parliament called for pay hikes, reducing the number of teachers’ working hours, support for those starting their career in education, the withdrawal of the regulation on the compulsory schooling of six-year-olds and the withdrawal of the act on vocational education.

Addressing the protesters, PSZ leader Zsuzsa Szabó said that if the government fails to meet their demands, the union will call a nationwide teachers’ strike in January.

In response to the demonstration, the ministry of human resources said in a statement that the ministry had been open to the negotiations, which had been ongoing for several months, and remains open and ready for consultation on further wage demands.

The ministry added that the teachers are not demonstrating against the government but for higher wages, therefore they consider it outrageous that the opposition parties are exploiting the opportunity for their own political goals.

The ruling Fidesz party also issued a statement, saying that the opposition and the network of George Soros exploiting the teachers’ demonstration are only interested in coming to power rather than the fate of teachers, and their real aim is to replace Hungary’s anti-immigration government.

The opposition LMP has expressed solidarity with the teachers and support for the demonstration.