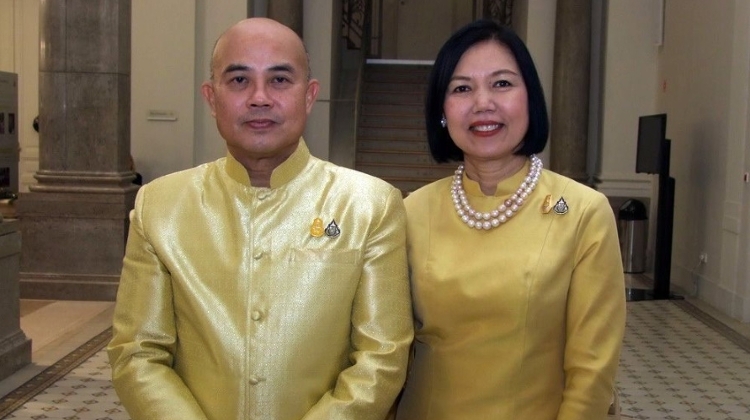 Rarely can it have happened that a new ambassador presents his credentials to the President of Hungary in the morning and then hosts his country's National Day celebration hours later in the evening, but the double duty fell to Ambassador Bhakavat Tanskul of Thailand at the Hungarian Heritage House in Budapest's District I on December 6.

Ambassador Tanskul welcomed his guests by informing them that on the previous day the Kingdom of Thailand had celebrated three special occasions: the birthday anniversary of His Majesty King Bhumibol Adulyadej The Great, Father's Day and the National Day.

The Ambassador said the King is loved and revered by the Thai people, who refer to him as "Father of the Nation". It was therefore natural that His Majesty's birthday anniversary had been designated Thailand's Father's Day.

During the seven decades of His Majesty's reign, 1946-2016, Thailand witnessed a devoted and hard-working king who initiated more than 4700 development projects aimed at improving the quality of lives of his people, particularly in the rural areas throughout the country, Ambassador Tanskul said. With deep respect and love by the Thai people, December 5 had also been designated Thailand's National Day.

At international level, December 5 had been proclaimed World Soil Day by the United Nations in honour of His Majesty's contribution to soil science and research as a resource for poverty eradication and climate change.

Long before sustainable development gained global attention, King Bhumibol developed ways to improve unfertile soils and build water reservoirs for the rural poor without sacrificing the environment, the Ambassador said. His Majesty had been awarded, among many other international recognitions, the first United Nations Human Development Lifetime Achievement Award in 2006.

His good works were in keeping with Thailand's ancient tradition. For over 700 years the monarchy had been at the heart of the Thai nation. Through periods of calm and turbulence, the monarchy had remained a steady, comforting presence and a pillar of stability.

Ambassador Tanskul said 2019 has been an auspicious and progressive year for Thailand. In May the whole country had celebrated the coronation of His Majesty King Maha Vajiralongkorn, Rama the tenth.

At his coronation, the King had declared he would continue and carry forward his father's commitment to reign with righteousness for the benefits and happiness of the Thai people.

Furthermore, a democratically elected government had been established after free and fair general elections, the Ambassador said. The new government had committed to promote sustainable and inclusive economic development aiming at boosting Thailand's economic competitiveness through the development of economic zones.

At regional level, Thailand had completed its most important duty as the Chair of the Association of South-East Asian Nations by hosting the ASEAN Summit last month, which, among others, led to the conclusion of the Regional Comprehensive Economic Partnership, which is the largest Free Trade Agreement combining 30 percent of the world's Gross Domestic Product.

On the bilateral front, 2019 had also marked a historic milestone for Thai-Hungarian relations. The two countries had celebrated the 150th anniversary of friendship that dated to 1869 when the Kingdom of Siam concluded the Treaty of Friendship, Commerce and Navigation with the Austro-Hungarian Empire.

"To this day, our close and cordial relations are thriving into their golden era," Ambassador Tanskul said. "Thailand has become Hungary's biggest trading partner in South-East Asia with an increasing bilateral trade volume in the first three quarters of 2019.

Moreover, in October Thailand signed a Memorandum of Understanding on Cooperation in the Field of Water Resources Management paving ways for further exchanges with Hungary in the fields of water management.

To build upon the momentum, next year Thailand looks forward to hosting a Thailand Business Forum in Budapest and the third Joint Committee for Economic Cooperation in Bangkok."

The Ambassador said he would endeavour to strengthen Thai-Hungarian bonds at all levels, and most importantly to further reinforcing closer interactions between citizens. He proposed a toast to King Maha Vajiralongkorn and the President of Hungary, and to everlasting friendship between the two countries and peoples.