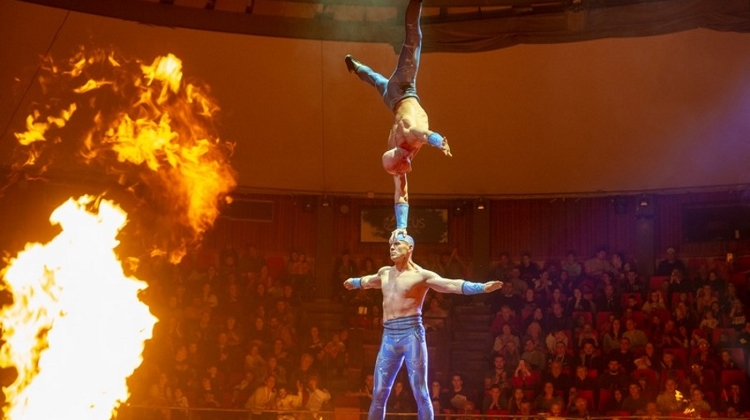 Seen until 10 March. Internationally renowned artists, bombastic productions directed by the world-famous Rippel Brothers: Phoenix – Circus of Fire will be on the show of the Capital Circus of Budapest from the 19 January until the 10 March.

The year 2019 starts with a fiery, mystical circus show full of acrobatics, illusions and exotic animals in the Capital Circus of Budapest, directed by the Rippel Brothers – Ferenc Rippel and Viktor Rippel. During the last years ice and water covered the circus floor, now it will be wrapped in fire.

The main concept of the classic circus production will be fire, an element which changed everything in the progress of humanity. The origin, power and importance of fire will come to life in the circus floor with the spectacular productions of the world-famous Hungarian artists, who will summon the different shapes of this prime element with the magical language of circus art.

The Phoenix, this unique mythical creature is born from fire, which captured the imagination of many mortals during the history.

This sacred bird is consumed by flames in the last moment of its life, then it is reborn from its ashes, like a soul renewing itself, and therefore it became the symbol of renewal, resurrection, purity, strength, healing, creating and creation during the ages. Its energy inspires to create and act, just like the show of the Capital Circus of Budapest premiering in the 19th of January: it teaches, motivates, makes one think and astonishes at the same time.

The Phoenix – Circus of Fire production features world-famous Hungarian stars: the grandmaster of high wire, László Simet rides a bike on the oblique wire and amazes the audience with an inimitable death wheel act.

The Anima Prizma fire juggler group gives life to the fire with a spectacular fire show, while Dávid Nagy Molnár, the master of illusion enchants the audience as a fire wizard. The Rippel Brothers – directors of the show – presents their masterful powerlifting act on a giant cube.

The future generation also performs in the show of the Capital Circus of Budapest: the four members of Fire Angels of Rippel Brothers Academy perform an astonishing aerial act, the TwirlinGirls – Csenge Jerabek and Szilvia Faludi – perform a dynamic roller skate act, while Szilvia Faludi performs a spectacular ring act – all of which will capture the audience.