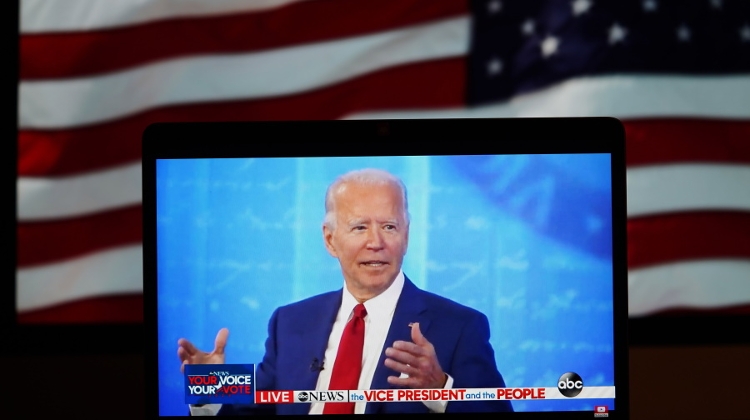 Just in the last week hundreds of articles have been churned out from the Orbán propaganda factory on the approaching U.S. election.

Practically all of them have been written in campaign mode for the regime’s favorite, Donald Trump.

At the same time, a barrage of unspeakable verbal attacks have been leveled against his Democratic opponent, Joe Biden.

As if a mini version of the American election were taking place in Hungary.

Let me start with an article that appeared in the October 12 issue of Origo, which reports the shocking news that Joe Biden called Latin American immigrants “the future of the United States” in a campaign event held in Las Vegas three days earlier.

The Democratic candidate, the article continues, is courting Latino voters for selfish reasons while, “in his usual corny style,” he talked about the difficult position Latinos found themselves in as a result of the pandemic.

“Of course, Biden did not talk about President Donald Trump’s job-creating, tax-cutting programs, or the unemployment rate in America that fell to a 50-year historic low,” as if that were the duty of a political opponent.

The article claims that Biden as vice president did little for Latinos, and therefore he is justifiably worried about losing their support in Nevada.

Four years ago, 65% of Latinos voted for Clinton and only 29% for Trump, “but this ratio will surely change in Trump’s favor,” claims the article.

The latest polls don’t support this contention, although the Biden campaign isn’t taking a Democratic win for granted in the state.

On the very same day, Origo came out with a report on the racist Biden, who had a slave-owning ancestor.

The article spends considerable time on the genealogy of a certain Robinette family because Biden’s middle name is Robinette.

But Origo didn’t do a thorough enough job in researching the issue because the great-great-great grandfather in question was not Joe Robinette but Thomas H. Randle, and, according to Snopes, it is undetermined whether he was actually related to Biden or not. Not that it matters one way or the other.

Two days later, Origo wrote that “Biden no longer remembers that he is the presidential candidate.”

The article begins with a reminder that the Democratic party is “a left-wing party,” I guess to send the proper message to supporters of the Orbán government.

The claim is that “Biden is showing increasingly obvious signs of dementia, and therefore it is not surprising that President Trump calls him Sleepy Joe.”

But even less right-radical news sites, like Mandiner, take The New York Post’s suspect information about Biden’s involvement in Ukrainian politics for granted.

It announced that “Biden is corrupt and shouldn’t be allowed to run for the presidency.”

As far as Magyar Nemzet is concerned, the government’s flagship daily more often than not takes over news items from Origo, although it also publishes information coming from more reliable sources.

One of these is a recent MTI news item that hails from Washington. It is based on an interview with a Hungarian-American political scientist, Miklós Radványi, deputy director of the conservative think tank Frontiers of Freedom.

Radványi, by the way, might be a Trump supporter, but he is an outspoken critic of the Orbán regime. His interviews normally appear in Hírklikk, which is a left-leaning news site.

But now, Magyar Nemzet is quite willing to publish his optimistic thoughts about Donald Trump’s chances.

In Radványi’s opinion, “support for Joe Biden is overestimated by the media” and a win by Trump is still very much a possibility.

On a rarely quoted internet site called Növekedés (Growth) I found an opinion piece by János Devecsai, who admits that Trump is in serious trouble, but “he can still win” because Biden is unable to mobilize his followers as well as Trump can.

Viktor Orbán is supposed to be a clever politician, but then how can we explain his obstinate clinging to a position that seems increasingly untenable?

One possible explanation is that the prime minister knows from bitter experience during the Obama years that Democratic administrations normally don’t support the kind of regime Orbán has been built over the last ten years.

He figures that even a more balanced stance on the U.S. election wouldn’t make a real difference in the likely frosty relations between Washington and Budapest after January 2021.

There will probably not be another David Cornstein as U.S. ambassador in the Hungarian capital.

Mark Hoffman, a conservative from Center Valley, Pennsylvania, who voted for Trump in 2016, asked Biden whether “President Trump’s foreign policy deserves some credit.”

Biden’s answer was “a little, but not a whole lot,” and he followed up with some of the well-known foreign policy mistakes Trump made in the last four years.

“You see what’s happened in everything from Belarus to Poland to Hungary, and the rise of totalitarian regimes in the world, and as well, the president embraces all the thugs in the world.

I mean, he’s best friends with the leader of North Korea, sending love letters. He doesn’t take on Putin in any way, and he’s learned the art of the steal from the art of the deal by Xi and China.”

If Biden is describing the Polish and Hungarian as regimes “totalitarian,” that is an overstatement.

But calling Putin, Kim Jong-un, Erdoğan, and Orbán thugs is apt. After all, in its historical meaning, a thug was a professional criminal who robbed and murdered travelers in northern India until the mid-1880s.

Orbán might not murder his political opponents, as Putin has tried to, but he, his family, and his friends are robbing the country and its people blind.

In response to Biden’ reference to Hungary, Foreign Minister Péter Szijjártó, in a four-minute video, called on Biden to come clean about his role in Ukrainian politics.

I’m sure that in the next two and a half weeks the Biden bashing will only intensify in Hungary.