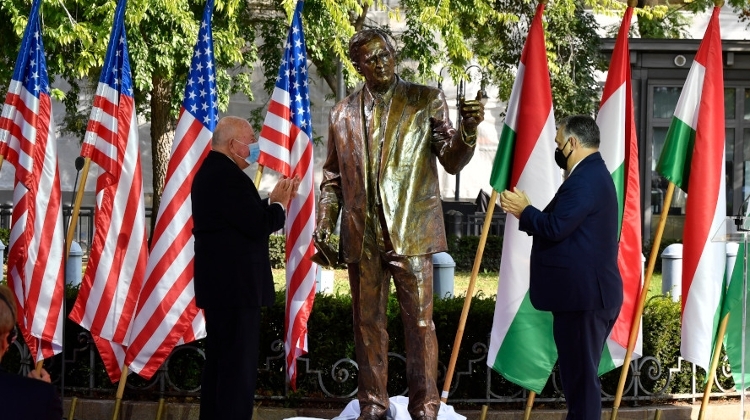 “Hungarians have always regarded the United States as a home of freedom,” Prime Minister Viktor Orbán said at the inauguration of a statue of George Herbert Walker Bush, the 41st president of the United States, on Budapest’s Szabadság Square.

Click here to see a video of this event

In his address, Orbán noted that 19th-century Hungarian statesman Lajos Kossuth had been given “a heartfelt welcome” in the US. He also said that the US embassy, located in the square, had given shelter to Cardinal József Mindszenty for 15 years after 1956.

“We will never forget that the embassy’s door was always open, thanks to the personal commitment of Mark Palmer, US Ambassador in Budapest between 1986 and 1990, to the young Hungarian democratic opposition,” he said.

Referring to two memorials in the square, one of German and the other of Soviet occupation, Orbán said that “they send the message that if you are Hungarian, you only have two options: either side with an occupying force or support freedom”.

“And today, we are here to honour with this statue our friend, George Herbert Walker Bush,” Orbán said, noting that it was erected next to a statue of President Ronald Reagan, calling them “two men from America who started the fight against global communism”.

Orbán noted that during his visit to Budapest in July 1989, President Bush expressed support for the democratic youth’s request “to free Hungary from Yalta” since the freedom and independence of central Europe had also been the president’s dream. “What we wanted was not to move closer to but become part of the free world,” the prime minister said.

Addressing the unveiling ceremony, David B. Cornstein, the outgoing US ambassador, said the statue was a symbol of US-Hungarian relationship and optimism for the future.

“The desire for freedom had never left the Hungarian people, and the collapse of communism in 1989 brought a new dawn to the hopes of freedom-loving people here and everywhere. President Bush’s visit to Hungary in July 1989 was a symbol of that hope,” the ambassador said.

He said President Bush had dedicated his life to address freedom around the world and help lifting people up. “A modest man with extraordinary vision and compassion, President Bush helped the people of Central and Eastern Europe to free themselves from communist rule,” he said.

The ceremony was attended by representatives of the Bush family and foundation, former New York State governor George Pataki and former US Ambassador April H. Foley.

Gergely Gulyás, the head of the Hungarian Prime Minister’s Office, and Ambassador Cornstein announced in early September the placement of the Bush statue in Szabadság Square to mark the 30th anniversary of the fall of communist rule in central and eastern Europe.

It was a historic moment when President George H.W. Bush addressed the people gathered to greet him in Kossuth tér in 1989.

And it was a heartwarming moment at the same time as he tore up his written speech saying: “You’ve been out here for too long. Let me just speak to you from the heart. And I’ll be brief.”

Whether you were there and can relive that moment through this video now, or see it for the first time, we hope you will enjoy it - say the team at the US Embassy in Budapest.