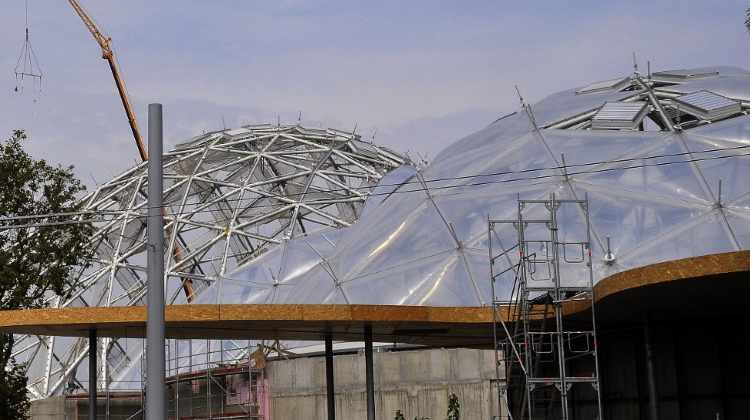 20 billion HUF (59 million EUR) is still needed for the completion of the new biodome part of the Budapest Zoo.

20 billion HUF (59 million EUR) is still needed for the completion of the new biodome part of the Budapest Zoo. At the end of last year, the director of the zoo, Miklós Persányi informed the public that there is no money left for the project’s completion. Budapest City Hall ordered to revise the whole Pannon Park Project.

The Hungarian Government will not provide more financial aid either, they blame Persányi for exceeding the budget.

The bubble-like biodome will be the central of the newly constructed Pannon Park Project. According to the plans the monumental building will be 17 thousands square metres which is similar to Parliament’s area, and the highest point of the dome will be 36 metres. At the moment the construction is at the phase of having a roof on the building.

The biodome will conjure up the flora and fauna once existed in the ancient Carpathian Basin. Among the subtropical animals there will be for example sea cows, chimpanzees and bonobos (pygmy chimpanzees), besides elephants will get a bigger territory. There is also a 2,5 million litres shark pool planned which will be biggest one in Central Europe.

Throughout the years, the project became four times more expensive compared to the originally planned cost, at the moment it is estimated to be 63,7 billion HUF (188 million EUR).

Persányi argued that the cost increase is due to Pannon Park was extended by new territories, and cost of wages and materials have also been increased. Besides some additional elements (e.g.: roller-coaster) were not included in the early estimations.

After Persányi’s announcement the Budapest City Hall responded they will not allocate more money for a 100% government financed project, and ordered to revise the whole Pannon Park Project.

The chosen revisor party (Enviroduna Beruházás Előkészítő Kft.) will not only revise but also plan different possible scenarios on how to complete the biodome. The City Hall also appointed a new finance director for Budapest Zoo, whose responsibility will be to stabilize the zoo’s economic operations. The capital stated the project must be completed either way, although the zoo director’s dream might not come true.

The Hungarian Government will not provide more financial aid either, they blame Persányi for the given circumstances. The government has already funded 43,7 billion HUF (129,2 million EUR) for the project so far. Budapest Zoo managed the plan and execution of the project independently, they requested the public procurement tenders, too.

The execution of the Pannon Park is handled by István Garancsi’s company, the Market Építő Zrt. The businessman is also known as the Prime Minister’s friend, and has won many projects funded by public procurement tenders.

It is not good news for the taxpayers that Miklós Persányi stated lately they “are not sure about two things: how much the income and the expense will be”. There is a rumour in the press that the operation and maintenance might cost 1 billlion HUF million (2,96 million EUR) monthly.

Environmentalist are not happy with the project either because due to the constructions several protected trees had to be cut off. Even though the heating is planned to be partly provided by the waste heat from the thermal water of the neighbouring Széchenyi Spa, the complex is environment polluting, since it will need similar amount of energy as a middle sized mall.

Budapest Will Not Finance Biodome At Zoo