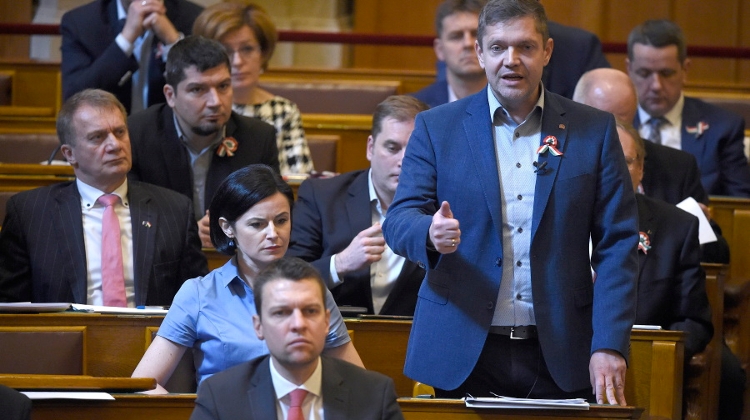 The opposition Socialists have urged the government to grant health and welfare workers in the forefront of efforts tackling the coronavirus epidemic a one-off bonus.

Bertalan Tóth, the party’s leader, called for the screening of health staff to be stepped up and for them to be provided with protective clothing.

He also called on the government to put a cap on the price of basic food products, protective clothing and disinfectants. He noted the price of oil and gas was falling on the global market, and urged cuts to retail energy prices.

Tóth also asked for pensions to be raised, arguing that the effect of a 2.8 percent hike pensioners received this year had “disappeared” in view of a higher inflation. He also called for intervention to shore up the forint. “The weaker the forint, the higher prices will be,” he said.

Barkóczi called on the government to apply tough sanctions against any retailers who price gouge.

Green party LMP has proposed a 50% wage increase for social workers and a 30% hike for health-care staff. János Kendernay insisted that the measures affecting the social sector in the economic protection plans announced by Prime Minister Viktor Orbán were under-budgeted.

Kendernay also called for people who lose their jobs to be given a rental subsidy, adding that landlords should show understanding. The LMP politician argued that Hungary’s economy needed to take a new direction after the crisis to lessen its vulnerability to multinationals, especially to German carmakers.

Párbeszéd has prepared a package of proposals for economic and social measures in connection with the novel coronavirus epidemic for submission to lawmakers, the party’s spokesman Richárd Barabás said.

He told an online press conference that measures announced so far by Prime Minister Viktor Orbán went in the right direction, but the government, he insisted, was focusing on the economy rather than people, who, when they lose their jobs needed social, health and unemployment support.

He called for the period during which the jobseekers’ allowance is paid to be increased from three months to nine and for a solidarity tax on everyone with assets worth more than 500 million forints (EUR 1.4m).

The central government should settle hospital debt as a matter of urgency and expand hospital capacity, he added.

People on sick-leave should be paid their full salary in the first six weeks and monthly 100,000 basic income should be paid to everyone in the following few months, he said, adding that public utility bills should be temporarily suspended.

The Párbeszéd politician also asked the government to stop using corporate tax donations for sports and turn these to health-care developments instead.