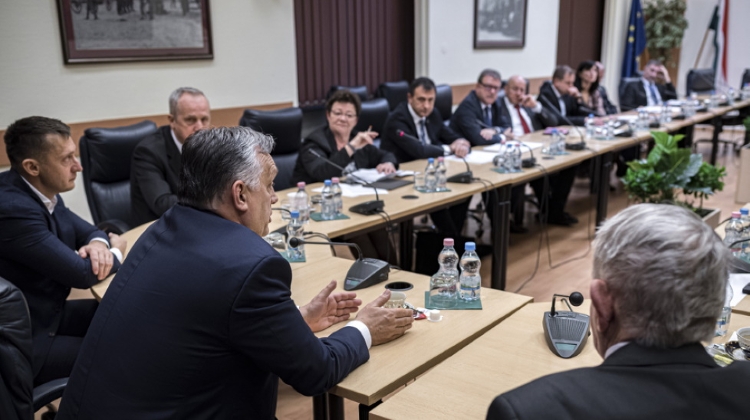 While over a hundred people have died in Italy as a result of the coronavirus epidemic, until today Hungary had no reported cases.

The Hungarian population, just like people in other countries, was anxious, especially because of the inadequate response of the authorities.

They gave out little information, and the information that was available was either contradictory or outright wrong. Dr. Miklós Kásler, the minister responsible for healthcare, doesn’t inspire confidence in general, and his reassurances didn’t calm anyone.

Neighboring Romania already had three cases in Timişoara, all with Hungarian connections. One person traveled across Hungary from Italy, and two infected university students, also traveling from Italy, spent a couple of days in Budapest.

So, it was becoming obvious that Hungary would not escape the difficult task of dealing with the outbreak of potentially life-threatening viral infections.

The Orbán government might have been slow to respond to the medical aspects of the epidemic, but it was eager to exploit it politically.

On March 1, György Bakondi, Viktor Orbán’s chief adviser on domestic safety issues, announced that, in order to contain the spread of the coronavirus, Hungary will suspend the acceptance of refugees in the transit zones along the Serbian-Hungarian border because, as he put it, “there is a certain connection between the coronavirus epidemic and illegal migration.” He hypocritically added that the decision was made also in the interest of the 321 people living in the transit zones.

The Hungarian Helsinki Committee immediately responded on the organization’s Facebook page, pointing out that the very few refugees who will have the opportunity to enter the transit zones have been waiting for this opportunity for months, if not years.

Serbia doesn’t have a single case of coronavirus, while between Hungary and Austria, where 14 cases have been identified, thousands of people cross the border daily.

In turn, Bakondi clarified “the certain connection” between the virus and the suspension of accepting refugees from Serbia. He explained yesterday that “the bulk of the illegal migrants come from Iran or across Iran,” which is “one of the epicenters” of the epidemic.

Considering that the majority of the refugees are from Syria, the government’s sense of geography seems to be wanting. By today, Bakondi in an interview with the government propaganda publication 888, went so far as to propose that “the coronavirus infection might be the threatening concomitant symptom of migration.”

Furthermore, he added that one cannot preclude the possibility of the virus already being in Turkey. The helpful journalist noted that Turkish border patrols wear masks, which must mean that they are afraid of coronavirus contamination.

Katalin Halmai, Népszava’s correspondent in Brussels, reported yesterday that the European Commission is investigating Hungary’s unilateral decision to suspend allowing refugees into the territory of the European Union because of the coronavirus epidemic.

One of its spokesmen told Halmai that such a drastic move “should be preceded by risk analysis based on scientific data.” He added that measures should be proportional to the size of the threat and that there should be coordination with the other member states.

That’s where things stood until a few hours ago, when Viktor Orbán announced in a video broadcast on Facebook that two people have been found to be infected in the country and that, indeed, they came from Iran — just not as refugees but as the happy beneficiaries of the Orbán government’s generous scholarship programs initiated in 2013.

ATV seems to know that the two Iranian students are enrolled at Semmelweis University’s School of Pharmacology. They returned to Hungary from Iran on February 22. According to the article, they live with other family members, who were also quarantined in the hospital designated for coronavirus cases.

It was at the end of 2017 that I wrote about the Hungarian government’s scholarship program, expressing my astonishment at the scope of the Stipendium Hungaricum program. Péter Szijjártó announced in 2013 that for the following academic year Hungary was expecting 2,000 students from the Far East, the Arab countries, and the Western Balkans.

By December 2015 arrangements were made with 45 countries, and Viktor Orbán indicated at that time that he would like to extend the program to 80 countries. He added that welcoming these students doesn’t alter the government’s attitude toward “illegal immigrants.” At that time, the number of foreign students was around 3,000.

A year later, in October 2018, g7.hu reported that more than 5,000 foreign students were enrolled in Hungarian institutions, at a cost of 5.5 billion forints. The generous scholarship program includes free dormitory accommodations and free health insurance, in addition to a monthly stipend.

It is estimated that each student in the Stipendium Hungaricum program costs the taxpayers 1.8 million forints a year. According to g7.hu, 487 Iranians were studying in the country in 2018, and today their number might be higher than that.

I find it ironic that the government, which was so eager to ban refugees from entering the transit zones because they might bring the virus into Europe from Iran, is now faced with the unpleasant task of admitting that the “migrants” had nothing to do with the appearance of the virus in Hungary. Instead, it was a consequence of a program that the Orbán government itself so proudly established.