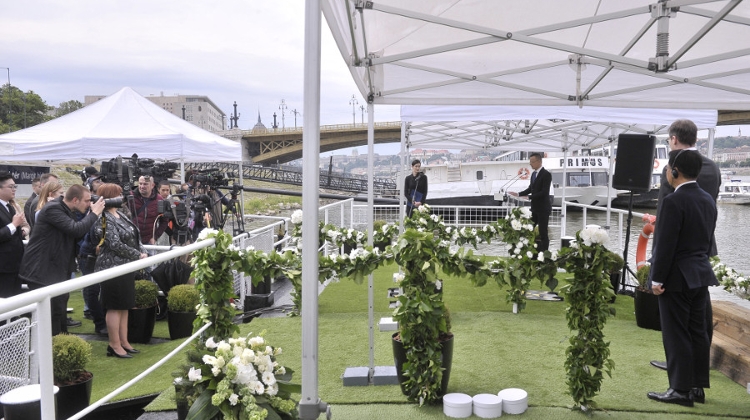 A commemoration was held in Budapest near Margaret Bridge on the first anniversary of the tragedy that claimed 28 lives when a sightseeing boat and a cruise ship collided on the River Danube.

On May 29 last year, the Viking Sigyn cruise ship collided with the Hableány sightseeing boat with 33 South Korean tourists and a crew of two Hungarians on board. Seven tourists were rescued from the water after the collision and the rest died. One of the bodies could not be recovered.

At the ceremony, a wreath was placed on the river by the crew of the Millennium ship of Panorama Deck, the company that operated Hableány.

They also lit 28 candles and sounded the ship’s bell 28 times to commemorate the victims.

Prior to the commemoration, a prayer service was held in honour of the victims. At the service, Panorama Deck spokesman Mihály Tóth said the memorial was also meant as a message to boaters to do a better job looking after each other.

In response to a question, he noted that the company had offered to donate the bow of the Hableány to be used in a monument to the tragedy.

The Hungarian-Korean Friendship Association also paid tribute to the victims at 11am by placing an arrangement of flowers tied with a ribbon of the national colours and candles on the river. They were also tossing flower petals into the river from Margaret Bridge.

At a separate commemoration event, Foreign Minister Péter Szijjártó said the victims and the day of the tragedy would always be remembered. He added that the Budapest Mayor’s Office, the office of the 5th district local government and the South Korean embassy will jointly erect a memorial paying tribute to the victims.

The design of the memorial, which is being carried out by a Korean and a Hungarian artist, will first have to be approved by the families of the victims, the minister said.

The memorial will be placed at the bridgehead on the Pest side of Margaret Bridge.
Budapest Mayor Gergely Karácsony said the municipal council will do its part in taking the necessary steps, highlighting the need to review boat traffic regulations in light of the accident.

Choe Kyoo-sik, South Korea’s ambassador to Hungary, said the embassy would do everything it can to bring comfort to the families of the victims and to ensure that those responsible are held accountable and that the families are compensated.

The captain of the Viking Sigyn was charged with criminal misconduct leading to mass casualties and 35 counts of failing to provide assistance after the collision. Due to the novel coronavirus pandemic, his trial was postponed until September.