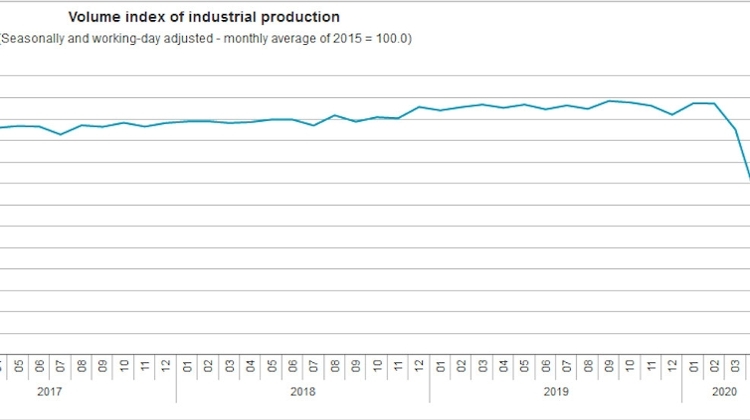 Hungarian industrial output plunged by an annual 36.8% in April, largely on the back of the fallout of the coronavirus epidemic, the Central Statistical Office (KSH) said, quoting its first estimate.

The fall was heaviest in vehicle production, while production of computers, electronics, optical products and food, beverages and tobacco declined to a lesser extent, the KSH said.

Month on month, output dropped by 30.5% in April, based on seasonally and working day-adjusted data. In the first four months of the year, output was 9.2% lower than in the same period last year.

Commenting on the data, the innovation and technology ministry said that the pandemic has resulted in serious losses both on the demand and supply side on the global market. Industrial output in Hungary reached its lowest point in April and a gradual increase was expected from May.

The ministry said it expected a recovery to begin in the second half of 2020 with the sector’s output returning to pre-epidemic levels as early as next year.

ING Bank analyst Péter Virovácz said that even the most pessimistic analysts had been surprised by the April data. April saw a record fall in output, he said, adding that a double-digit monthly drop for two consecutive months had been unprecedented.

Takarékbank analyst Gergely Suppan said coronavirus-related restrictions had resulted in an unprecedented drop in industrial output in April. He saw a possibility for the sector to pick up sharply in May.

He said demand might pick up gradually due to soaring unemployment, wage cuts and cautious consumer spending. Dávid Németh of K&H Bank noted that with April’s sharp drop, industrial performance was 73% of 2015 levels.

April is seen in the current outlook as the lowest point, but a second wave of the pandemic, if one emerges, could change that, he said.