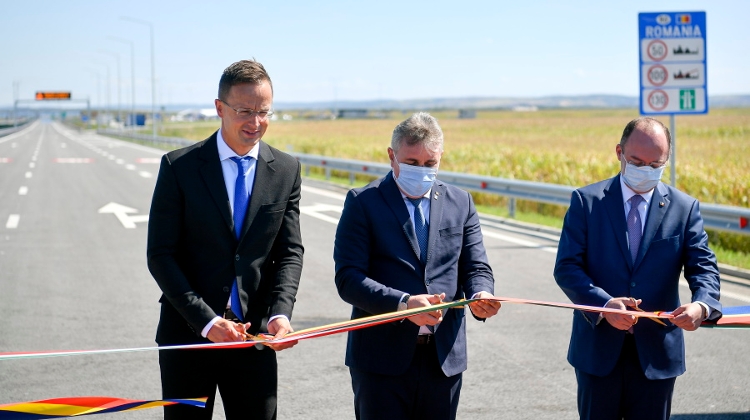 The foreign ministers of Hungary and Romania inaugurated the second motorway border crossing between the two countries. Hungarian Foreign Minister Péter Szijjártó said that the new link was a “shared success”, a basis for building “trust and mutual respect” between the two sides of the border.

“On this basis even thorny [bilateral] issues could be resolved and concluded,” he added. The new section between Nagykereki and Borş, in Romania, links Hungary’s M4 and Romania’s A3 motorways.

The new border crossing is the twelfth between the two countries, Szijjártó noted. Quality infrastructure is key in fostering neighbourly relations, he said.

The third motorway crossing between Romania and Hungary is planned to open in 2024, between Csenger and Satu Mare (Szatmárnémeti), he said.

A high-capacity natural gas interconnector is planned to start operation next year, and high-voltage electric cables will also be connected in the near future, he said.

Szijjártó emphasised the importance of cooperation between Hungary’s Hajdú-Bihar and Romania’s Bihor (Bihar) counties and of ethnic Hungarians voting in Romania’s local elections.

Speaking to the media after talks with the leaders of the ethnic Hungarian RMDSZ party’s Bihor County chapter in Oradea (Nagyvárad), Szijjártó said the newly inaugurated motorway links between Budapest and Oradea as well as Debrecen and Oradea would open the door to new development opportunities.

“One important goal is to create electrified rail links between Debrecen and Oradea as soon as possible,” the minister said. “The feasibility study for this project has already been completed in Debrecen. We’re prepared to support it with government funding and will propose to the Romanian government that we also make use of the funds offered by the European Union.”

Concerning the novel coronavirus pandemic, Szijjártó said the reason why Hungary has closed its borders to foreigners was so that it could avoid having to impose internal restrictions again to contain the virus.

Out of Hungary’s seven neighbouring countries Romania is the only one with which Hungary has kept all its operational border crossings open, he said.

“It was at the request of RMDSZ that we decided to keep every one of these border crossings open,” Szijjártó said.

As regards an agreement signed between the Hungarian government and RMDSZ’s Oradea chapter, Szijjártó said the next round of Hungary’s economic development scheme aimed at helping ethnic Hungarian communities in Transylvania will focus on north-western Romania.

The government has so far disbursed some 70 billion forints (EUR 195.1m) among 6,000 applicants, generating 130 billion forints’ worth of investments, he said. Szijjaártó said he had agreed with Senator Attila Cseke, head of the Bihor County chapter of RMDSZ, that Hungary will provide financial support to local Hungarians and the Reformed Church in Oradea to help them purchase school buildings and build dormitories for Hungarian students.

The minister also asked ethnic Hungarians living in Oradea and Bihor County to take part in Romania’s local elections, saying the election would also impact their lives and future.

“It would be nice if the proportion of the local Hungarian population and their share in political representation were brought into balance,” Szijjártó said. “It’s important for us Hungarians to be united.

It’s important that we support the biggest Hungarian political organisation with the best chance of winning in the election, since it’s our only chance for stronger representation here in Oradea, Bihor County and all of Romania.” Szijjártó also received an award from RMDSZ for his efforts in helping ethnic Hungarians in Romania.