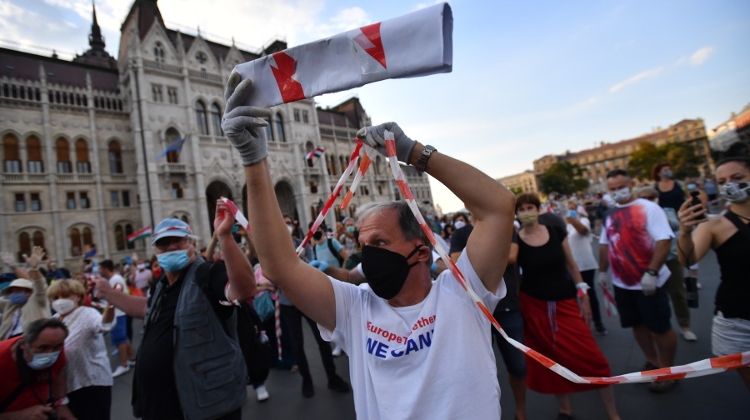 Students of the University of Theatre and Film Arts (SZFE) and their sympathisers protested in central Budapest on Sunday afternoon against changes to the way the university is governed. The protesters insist that the institution had lost its autonomy.

A human chain was formed starting from the university building in Vas Street, proceeding along Szentkiralyi Street, past the building of ELTE university on Muzeum Ring Road and Corvinus University on Fővám Square, past the headquarters of the Hungarian Academy of Sciences and along the embankment to Parliament.

The protesters forming the chain held the same kind of red and white plastic tape that was wrapped around the SZFE building.

They also passed a so-called charter written by the university’s outgoing senate which sets out fundamental principles regarding how the senate envisages cooperation with the Ministry of Innovation and Technology (ITM), the ministry responsible for sections of Hungary’s higher-education network.

Another human chain was formed in Kossuth Square in front of Parliament. While waiting for the charter, the demonstrators chanted: “Free country, free university” and several sang a choral work, Nobis pacem.

At the university’s Szentkirályi Street building, Lászlo Upor, the university’s outgoing vice-rector, noted that he had agreed with students occupying the university building to postpone Monday’s opening by a week and extended the enrollment deadline to Sept. 13.

But he also warned the academic year could not start unless the ITM addressed “the unsustainable situation”. SZFE is now managed by a new foundation chaired by Attila Vidnyánszky, the head of the National Theatre.