Opinion: US Capitol Hill Riot Compared & Contrasted To Hungary In 2006 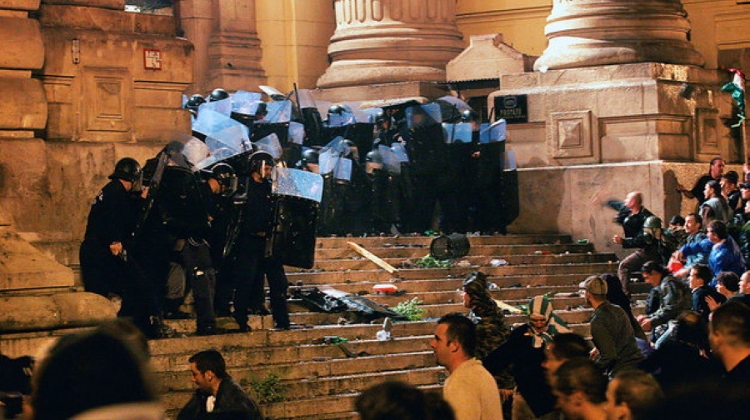 Columnists on both sides of the political divide find similarities between the siege of the US Congress and the disturbances in Budapest 14 years ago – but draw opposing conclusions.

In Népszava, Róbert Friss lambasts PM Orbán, who in his comment on the Washington riot suggested that street violence was a ‘left-wing habit’ in Hungary.

In 2018, left-wing demonstrators in front of the parliament building faced a police cordon for hours, he writes, but there was no violence.

On the other hand, in 2006, right-wing demonstrators broke into the public television building and vandalised it.

Friss calls the rioting in 2006 an attempted coup d’état perpetrated by the right wing and asks if Fidesz will accept a possible electoral defeat in 2022 or will resort to violence, just as President Trump’s supporters have in Washington.

In Magyar Nemzet, on the other hand, Bence Apáti recalls that when the mob assaulted the TV building, it was defended by a small and unprepared police unit which gave in to the crowd after the police command failed to send a rescue unit for several hours.

That makes him believe that the social-liberal government side let the rampage happen on purpose in order to discredit the opposition. He wonders why the Washington authorities showed similar incompetence during the assault against Capitol Hill last Wednesday.

Apáti also remarks that the same mainstream media which condemns the assault on Capitol described last summer’s left-wing protests and widespread urban destruction in the US as ‘mostly peaceful’.