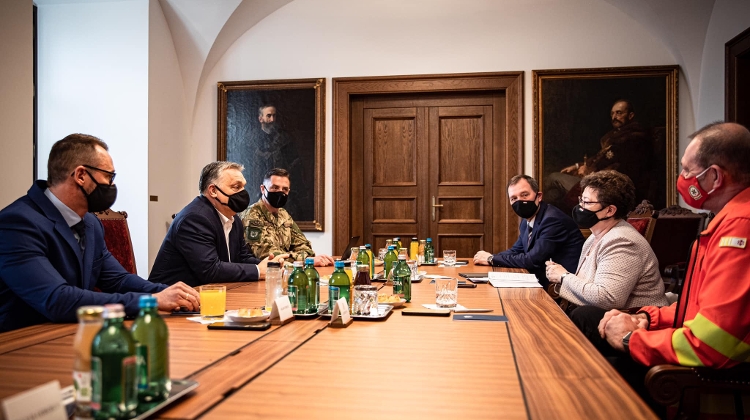 "Our health experts will determine when exactly we will be able to lift them. The Hungarian people, through the national consultation, will say how and at what rate," gov't spokesperson Zoltan Kovacs announced on Twitter today, Thursday 25 Feb.

A decision to ease restrictions introduced to curb the coronavirus pandemic is not yet within sight, with the possible exception of the ban on visits to elderly care homes, the prime minister said this Wednesday.

Speaking after the second round of consultations with epidemiological experts in a three-day series, Viktor Orbán noted in a video post that administering China’s Covid-19 vaccine started in Hungary on Wednesday,

“This is an important day … it gives me hope too that leaders of the protection efforts may also have their turn sometime next week.”

“The situation is not easy,” the prime minister said. While the amount of vaccines arriving in the country is growing, Hungary is also threatened by a third wave of the pandemic, he said.

“Those two tendencies … work against each other,” he said, citing experts as saying that everyone who can should get themselves inoculated.

Although lifting the restrictions is not in sight, the government will look into finding humane solutions to the situation in care homes for the elderly, Orbán said.

Those facilities have an 80% inoculation rate by now, and the residents are suffering gravely from the ban on visitors and outings, the prime minister added.

Hungary to have Inoculated 800,000 by end of this week

The number of people vaccinated against coronavirus may well have exceeded 800,000 by the end of this week, said István György, a state secretary at the Prime Minister’s Office.

Speaking at a press conference of the central board responsible for containing the virus, György said that Hungary’s vaccination rate was above the European Union average.

In the next few days GPs will use 275,000 doses of the Chinese Sinopharm vaccine to inoculate registered elderly patients, while 41,000 people below the age of 60 with chronic illnesses will receive AstraZeneca shot. Another 52,000 registered elderly are set to receive the Pfizer jab at inoculation centres, György said.

The “British variant” has been isolated in patients who have not travelled recently, showing that the variant is spreading within the country here, Hungary's chief medical officer is reported as saying yesterday.

To date, the “British variant” has been identified in 400 patients in Hungary, most have not travelled recently which shows the variant is spreading within the country, Dr. Müller announced.

Cecília Müller went on to describe how a Hungarian-developed method enables public health experts to test sewage specifically for the “British variant”.

She noted that traces of this particular type of the virus were found in the waste water of many large cities here, including Budapest, Debrecen, Győr and Székesfehérvár.

So far, 508,073 people have been vaccinated, of which 211,073 have already received their second vaccination.