Base Rate Kept On Hold By Policymakers At National Bank 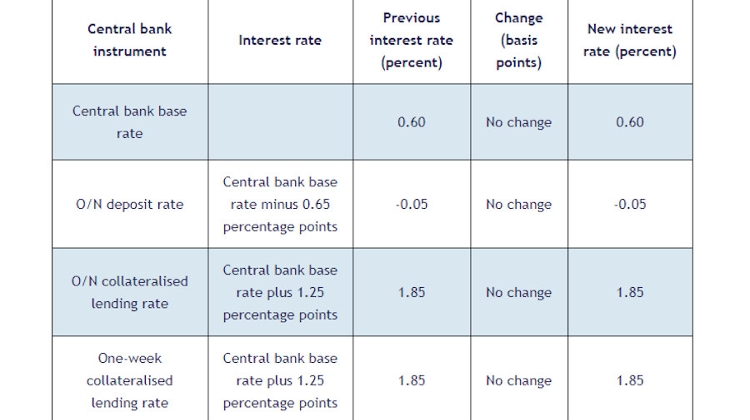 The Monetary Council of the National Bank of Hungary (NBH) decided to leave the central bank base rate unchanged at 0.60% at a monthly policy meeting.

The Council also decided to leave the O/N deposit rate at -0.05% and the O/N and one-week collateralised loan rates at 1.85%.

In a statement released after the meeting, the Council said inflation is “likely to be highly volatile” in the coming months, spiking due to base effects, rising fuel prices, further increases in excise duties and demand-supply frictions as the economy restarts.

The Council said the NBH remains “committed to maintaining price stability even during the third wave of the coronavirus pandemic”, adding that it is the central bank’s “clear intention to prevent the current uncertain environment from causing a sustained rise in inflation”.

It said the “greatest risk” in terms of the outlook for inflation is posed by “the increase in risk aversion vis-a-vis emerging markets and potential second-round effects following the restart of the economy”.

At a press conference after the meeting, NBH governor György Matolcsy said there would be “temporary upsurges” in inflation in 2021, but added that these would be the consequence of one-off and external factors. Hungarians should not expect “runaway” inflation, he said.

K&H Bank senior analyst Dávid Németh said the decision came as no surprise and monetary policy in the upcoming period will be determined by inflation reports and the NBH’s comments. One-week deposits have been unchanged for months at 0.75%, similarly to the base rate, he added.

Equilor Investment senior analyst Zoltán Varga said the NBH had significantly increased its inflation projection, from 3.5-3.6% forecast in December, to 3.8-3.9%. He added that the decision makers had stressed that they were ready to apply necessary measures if inflation risks increase.

Takarékbank senior analyst Gergely Suppan said it cannot be excluded that the NBH will be forced to increase the base rate in the second half of the year.

Further restrictions resulting from the epidemic continue to worsen short-term outlooks and the NBH may support economic recovery by means of unconventional measures, he added.