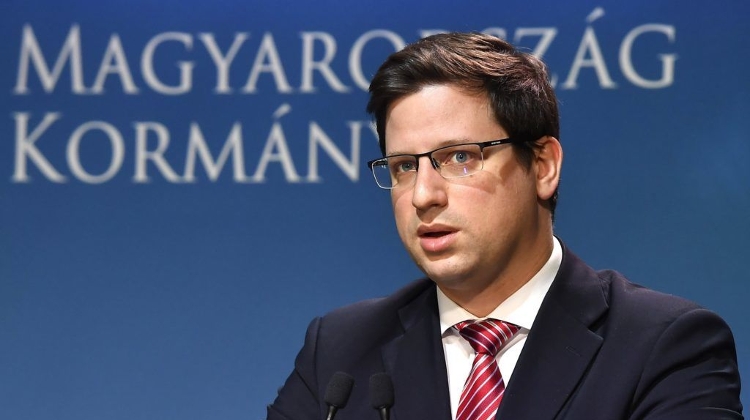 Those who refuse to be vaccinated because of that may even die,” he warned. Gulyás added that “the opposition also has responsibilities, and the vaccine mustn’t be politicised”.

So far, 1.15 million Hungarians have received the first jab, while 327,000 are fully inoculated, Gulyás said. The Hungarian population’s vaccination rate is second highest in the European Union, he said.

Gulyás said that 11.3% of Hungarians had received at least the first jab, compared with the EU average of less than 7%.

He insisted that Hungarian health services were inoculating 0.6% of the population a day, compared with 0.2% in the EU.

“Therefore the Western press cannot help reporting the success of the Hungarian vaccination programme,” he said, citing a German report referring to the “extreme speed” of inoculation in Hungary. Some 3.2 million Hungarians, less than 50% of the population, have registered for vaccination, Gulyás said, adding that a 60 or 70% ratio would be desirable.

Meanwhile, Gulyás said that the government would make its contracts on procuring the Sputnik V and Sinopharm vaccines available for the public within a day, and called on the European Union to allow publication of European Commission contracts too.

Brussels, he said, had “banned” publication of those contracts, adding that he had turned to the commissioner in charge of the matter to allow member states to make the EC’s vaccine contracts also publicly available.

He said that “many countries are much further ahead with their own purchases” and insisted that “everybody has the right to know” details of the European contracts such as conditions and timing. If disclosing those dates “does not harm the interests of China or Russia, it will not harm interests of the EU, either”, he said.

On the subject of the country’s vaccination plan Gulyás said: “The Hungarian government will be able to have everyone vaccinated in the first half of the year,” and would therefore order vaccines for the second half “only if absolutely necessary”.

The vaccines contracted so far would suffice to inoculate one-and-a-half times the entire population of Hungary, he said.

“We have ordered everything slated to arrive in the first half of the year, and passed on some [vaccines] which would only be delivered in the second half, especially towards the end of the year,” he said, adding that the EC’s “claims” on the issue were “untrue and therefore unacceptable”.

Gulyás said some 60-70% of the population, or around 5 million people, would have to be immune to the coronavirus for Hungary to achieve herd immunity.

Currently, 8,329 people are hospitalised with the virus, with forecasts expecting that number to top 10,000 in the coming weeks, putting the health-care system under enormous strain, Gulyás said.

There are currently 13,244 free beds and 1,918 free ventilators in Hungarian hospitals, Gulyás said.

The decision of the National Hospital Directorate to order health-care staff to relocate to hard-hit hospitals ensured that the necessary staff are also at hand, he said. Hungary currently has over 7,000 vaccination points, with a capacity to inoculate up to 500,000 people in a single weekend, Gulyás said.

He added, however, that there are not enough vaccines at hand to fulfil that potential. All deliveries are examined by experts ahead of distribution, and all approved vaccines are then administered to the people straight away, Gulyás said.

Commenting on the price of vaccines, Gulyás said Sputnik V cost 19.9 US dollars, or 17 euros, for both doses.

Two doses of the Chinese Sinopharm vaccine cost 63 euros, he said. The vaccines available in EU procurement are “somewhat cheaper, some by a little, some by a lot,” he said, repeating that the EU should make the prices publicly available.

Hungary has also commissioned 4,360,000 doses of the one-dose vaccine produced by Johnson and Johnson, Gulyás said.