Hungary Has Among Lowest Level Of Expats Compared To EU Average 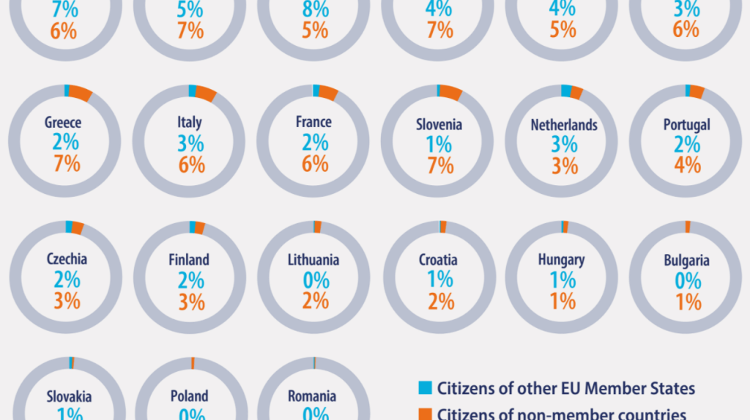 Countries in Central Europe have among the lowest shares of foreigners (both EU and non-EU nationals) relative to their population size, according to new Eurostat data.

Over 36 million non-nationals in the EU

In January 2020, approximately 23 million non-EU nationals were living in one of the EU member states, accounting for over 5% of the bloc’s population.

Additionally, some 13.5 EU citizens were also living in another member state, representing 3% of the EU population.

In relative terms, Luxembourg is the EU country with the highest share of foreigners, with nearly half of its population (48%) being made up of non-nationals (39% of EU citizens and 9% of third-country nationals).

Visegrad Group countries are at the opposite end of the scope.

The Czech Republic comes first with over 5% of its population constituted of foreigners (2% EU-nationals and 3% non-EU), or approximately 550,000 people in absolute terms.

Hungary (2%), Slovakia (1%) and Poland (1%) all have a significantly marginal proportion of their total population made up of non-nationals, whether from another EU member state or from outside the bloc.

Eurostat’s data looks at foreigners living with permanent or other types of legal residence in the country. Real figures may be relatively higher in a number of EU member states.

In Poland, the national Office for Foreigners found that over 450,000 non-nationals were living in the country last year with valid residence permits, an 8% increase year-on-year, and representing 1.7% of the population (higher than Eurostat’s estimates).

Same thing in Slovakia, where local authorities had estimated the number of foreigners to be at least 120,000 (or 2.2% of the country’s total population), including more than half from nations outside the EU.

Regardless of the data source, however, the share of non-nationals living in Central European countries remains among the lowest in the EU.