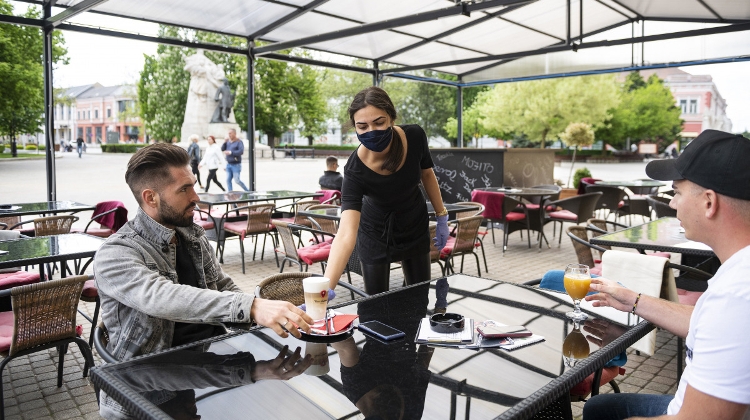 PM Orbán just confirmed that Hungary has reached the 3.5 million vaccinated mark, in his regular Friday radio interview, and so restaurant and bar terraces may open tomorrow, Saturday 24 April.

The prime minister's chief of staff Gergely Gulyás has said that open-air facilities and shops will be able to stay open until 9.30pm, and the night-time curfew will begin an hour later at 11pm.

Reopening catering facilities is “the first step towards regaining freedom”, Gulyás said, adding that he hoped faster steps could follow.

The number of vaccinated people is expected to reach 4 million next week, after which more reopening will happen and will be available for those who have a certificate of immunity, noted the PM.

After that milestone is reached 'immunity pass holders' will be able to go to theaters, cinemas, gyms, swimming pools, zoos, museums, libraries and sports events. Also, hotels and the indoor areas of restaurants can also welcome guests who have been vaccinated or who can prove they have recovered from Covid-19.

“A large amount of vaccine is expected to arrive soon,” he said. During the next week, one million doses of the Chinese vaccine will arrive as well as 200,000 first doses of the Russian vaccine, Gulyás said, adding that the second dose of the latter would follow promptly.

Over 300,000 doses of Pfizer will also arrive next week, he added. The number of vaccinated may surpass 4 million next week, and those registering now may get their jabs within a few weeks. So far, some 4.4 million have registered for the vaccine, Gulyás said.

Hungary will need some 6 million people vaccinated to reach herd immunity, he added.

Vaccination Certificates Are Being Issued After First Jab

The minister also said that one percent of those inoculated with at least the first shot had contracted coronavirus but their symptoms were “significantly milder”.

In the case of those fully inoculated, the figures were “even better”, he said. Even though full protection is only achieved after the second shot, already one dose significantly reduces the risk of infection, Gulyás said.
- This is the reason why vaccination certificates are being issued after the first jab, he said.

The “rights” certificate holders will be entitled to exercise will be determined in the coming week and announced by Prime Minister Viktor Orbán, Gulyás said.

Regarding the Hungarian research into the vaccines accredited in the country, Gulyás said the results will be published at a later date.

At the moment, Sputnik V seems to be the most effective of all, and “Sinopharm seems better than Pfizer”, Gulyás added.

At the same time, all vaccines are extremely effective, he said. Vaccine producers currently guarantee six months of protection for those inoculated, Gulyás said. Therefore, it is possible that some will need booster shots in September, he said.

Gulyás warned that “anti-vaccination campaigns shaking the trust in vaccines” may cost lives. The average age of those dying after contracting Covid remains above 70 in Hungary, while some 20% of the fatalities is suffered by 50-65-year-olds.

There is currently one child with Covid-19 on ventilator, Gulyás said.

What about reopening borders?

Regarding the reopening of borders for Hungarians with family members in neighbouring countries, Gulyás noted that the inoculation rate across the borders lags behind that of Hungary.

One of first steps in reopening the borders, however, will be to allow people to see their families, he said.

In the coming days, Orbán will announce steps for the next stage of reopening the country, scheduled for when the number of those vaccinated reaches 4 million, he said.

Yesterday PM Orbán held talks with WHO Europe Regional Director Hans Kluge on Hungary’s vaccination drive, efforts to restart the economy and ties with WHO in his office.

Kluge expressed appreciation concerning Hungary’s measures to contain the epidemic. Orbán and Kluge agreed that the economy and everyday life should be restarted gradually. The prime minister outlined Hungary’s plans for reopening.

The WHO director reiterated that schools should be closed last and reopened first. He praised Hungary’s “exemplary” vaccination drive, adding that vaccines should be handled as the most important means to save lives.

Orbán and Kluge agreed that vaccination should not be seen as a geopolitical issue because it is the only tool for subduing the epidemic and all vaccines are effective.

Fully 207 patients, generally elderly with co-morbidities, died over the past 24 hours, while 3,427 new infections were registered, koronavirus.gov.hu said on Friday. So far 3,500,000 people have received a first jab.

The number of active infections stands at 264,039, while hospitals are caring for 7,177 Covid patients, 844 of whom need respiratory assistance.

Since the first outbreak, 764, 394 infections have been registered, while fatalities have risen to 26,208.

Some 1.48 million doses of vaccine are scheduled to arrive in Hungary from Russia and China in the next ten days, Foreign Minister Péter Szijjártó said.

After consultations with WHO Europe Regional Director Hans Kluge, Szijjártó told a joint press conference that 600,000 doses of vaccine are scheduled to arrive from China on Saturday, which will be the largest shipment since the start of the pandemic.

Early next week, some 280,000 doses of the second-component Sputnik vaccine are scheduled to arrive from Russia, he added.

In the second half of next week, an additional 400,000 doses of the Chinese vaccine will arrive, in addition to a shipment of 100,000 doses bought for Georgia, he said.

Additionally, 200,000 first-component Sputnik vaccine is also scheduled to arrive in the second half of next week, he said.

Hungary will have received 2.1 million Chinese jabs by the end of April, some 600,000 doses more than originally contracted, he said. This will help address the situation resulting from the withdrawal of a Western supplier, he added.

Deliveries of the one-dose Janssen vaccine were halted due to concerns regarding blood clotting, a rare but dangerous side-effect.