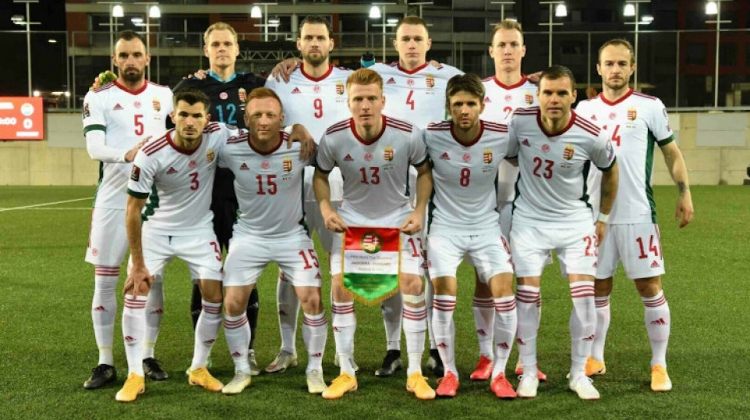 Hungary's football team had to battle through a tough first half against Andorra but first international goals for Attila Fiola and Dániel Gazdag either side of half-time and further strikes from László Kleinheisler and Loic Nego meant that Pujol's late penalty was merely a consolation for the hosts, Marco Rossi's team thus securing another three important points in their quest for 2022 World Cup qualification.

Fully intent on avoiding a repeat of their single-goal defeat here four years ago, Hungary lined up in an attacking 3-5-2 formation, Dénes Dibusz in goal behind a defensive trio of Attila Szalai, Ádám Lang in the middle and Attila Fiola to his right.

Ádám Nagy anchored the centre of midfield with Zsolt Kalmár and László Kleinheisler either side of him, Szilveszter Hangya on the left wing and Gergő Lovrencsics on the right, the latter two tasked with supplying the crosses for strikers Nemanja Nikolic and Ádám Szalai.

From the outset it was clear Andorra were going to take the fight to their visitors, the match swiftly turning into somewhat of a physical battle.

Hungary's Kleinheisler and Lovrencsics both found enough space to try their luck from distance early on, but neither could find their range and test the keeper.

Indeed, the first notable incident came when Kalmár landed awkwardly and had to taken off due to injury, Dániel Gazdag replacing him midway through the half. Undeterred, Hungary pressed forward throughout and Andorra's forays forward were rare, but it was only in dying embers of the first 45 minutes that Rossi's men managed to pose a real danger, Ádám Szalai's first sight of goal being blocked and Nikolic lifting Gazdag's resultant corner back into the box from the left for Fiola to head in his first ever international goal.

First-half added time is well known for being the perfect moment to score from a pyschological perspective and Hungary carried this positive momentum straight into the second period. Gazdag went close with one header at the far left post in the 49th minute but the Honvéd midfielder went one better just a few minutes later when Nikolic again played goal-provider, regaining possession after a block from his own low, right-wing cross and swinging the ball back into the six-yard box for Gazdag to rise purposefully and head the ball down and inside the far left post for his maiden strike at full international level.

To their credit, Hungary maintained the pressure on their opponent, Nagy's lofted, 58th-minute pass forward being flicked on by Ádám Szalai just outside the Andorra penalty area to Kleinheisler who took one touch to control the ball and another to dispatch it calmly into the far, left corner of the home team's goal.

The same player went close to scoring again with 15 minutes left, but after finding space well on the edge of the area, the Osijek playmaker could only curl the ball a metre or two wide of the left post.

Hungary were in total control and a fourth goal did eventually come, Roland Varga's sumptuous free-kick striking the right post and leaving fellow subsitute Loic Nego with the simplest of tasks in tapping the ball into the empty net after a defender had failed to clear the rebound.

Remarkably, that wasn't the end of the scoring, Hangya being penalised for a right-wing cross striking his arm in the Hungary penalty area in the 93rd minute and Pujol stroking the penalty down the centre of the goal to at least secure a consolation for Andorra.

Hungary, meanwhile, are on a run of nine competitive matches unbeaten and after a draw with Poland and three-goal margins of victory over San Marino and Andorra in the last week, now have seven points in qualifying group I, just two behind their next World Cup qualifying opponents England, whom they play in the Puskás Aréna on 2nd September.