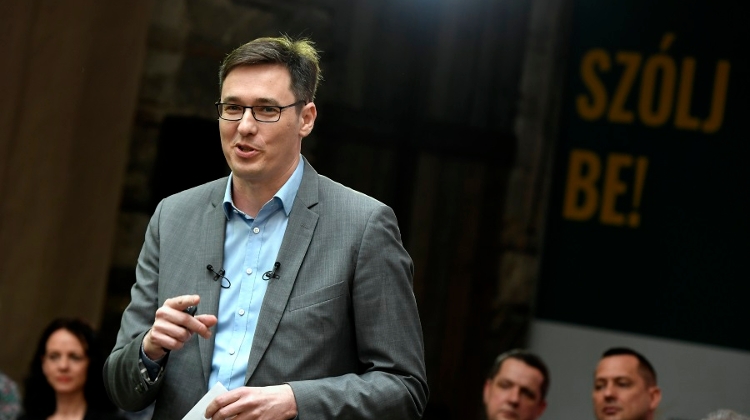 Karácsony, the prime ministerial candidate of the Párbeszéd, Socialist and LMP parties, said the first programme points contained measures that could be started immediately and implemented “relatively swiftly … to provide compensation for the past ten years”.

The programme would scrap the section of the Labour Code that provides for the possibility of 400 hours of overtime, known among the opposition and critics as the “slave law”, Karácsony said.

They would also “write a new Labour Code together,” he said.

Regarding education, Karácsony called the lowering of the age limit of mandatory education from 18 to 16 years a “sin”, and said his government would create targeted programmes “for the youth pushed out of education”.

The Fidesz government’s decisions stripping some religious organisations of their church status will be reviewed, he said. “The crimes against Hungary’s rural areas will have to be remedied” and land privatisation laws reviewed, he said.

Of the “many things that should be remedied in the pension system”, Karácsony said his movement saw the plight of those receiving disability pensions as a priority.

Regarding steps to address the problems of the past year, Karácsony said they would support SMEs which saw a substantial fall in revenues during the coronavirus epidemic.

He also proposed that SMEs which suffered revenue losses above 50% should be exempt from paying social contributions. Jobseekers’ allowances should be extended to nine months, Karácsony said.

Those who only received such an allowance for three months under the current legislation should be compensated, as well as those forced into taking sick leaves during the pandemic, he said.

Health-care and social workers would get a one-off wage subsidy of 500,000 forints (EUR 1,440) as a show of gratitude for their work during the pandemic, he said.

Karácsony said the Fidesz government had “punched an enormous hole” into local authorities’ operations by redirecting business tax and vehicle tax revenues during the state of emergency.

Local councils could tax fortunes larger than 500,000,000 forints to recoup the resources, he proposed.