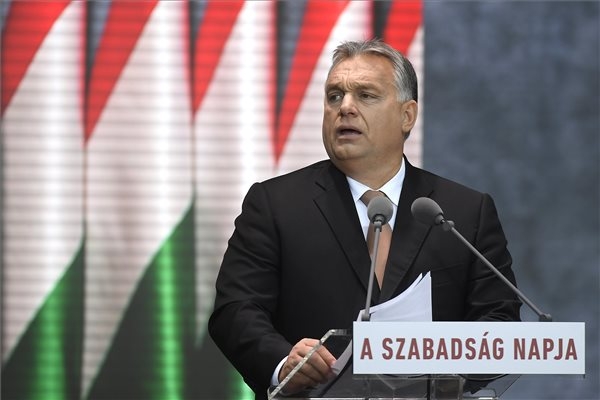 Brussels is creating a European superstate instead of a Europe of nation states, the prime minister has said.

“National democrats” oppose the makers of empires, who are in turn “opponents of democracy”, Viktor Orbán told a conference marking Hungarian Independence Day.

Europe as a “cultural formation”, he said, was “fabulous” and “inimitable”.

But the European Union, Orbán said, was a political body created by countries defending their economic and military interests after the second world war when the US and Soviet Union vied with each other on the continent.

“The EU was created to ensure that Europeans once again decided Europe’s fate,” he said. Today, however, Europe was not actively improving or transforming itself, Orbán said.

“It is we who must improve and transform it, and lead it back to its former successful path.”

“Today we’re the same as we’ve always been: Europe’s last freedom fighters. The history of Europe did not simply change; we changed it.”

Orbán insisted that Europe was in need of “freedom fighters of our own kind”.

Prime Minister accused EU of skating towards building an imperial superstate in Brussels without a democratic mandate instead of conceiving of a Europe of nations. A European “demos” doesn’t exist; only nations do, he said.

“Democracy can’t be built without a demos,” he said, adding that an empire in Brussels would end up lacking democratic legitimacy. “What we want is a democracy of democracies based on European nations,” he said.

The prime minister said the powerholders of Brussels saw integration not as a means but as an end in itself, and they were intent to ride roughshod over national interests and traditional values.

EU’s legal systems, he added, helped rather than hindered this endeavour.

He accused his political opponents of seeking to weaken natural communities that formed the bedrock of European culture.

Hungary’s government therefore wants the term “ever closer union” to be excised from the Treaty on European Union, he said.

The prime minister also accused Brussels of having “outsourced” a sizable portion of its power to “networks managed from outside Europe”, referring to “the Soros networks” and the US Democratic Party interests behind it.

First, the European Commission transformed itself from being a politically impartial guardian of the bloc’s treaties into a political body, he said, adding that this had taken place openly with a public announcement to that effect by President Jean-Claude Juncker.

This is why, he said, the British and Hungarians had refused to back Juncker as the bloc’s president, arguing Juncker’s stance had ultimately led to Brexit.

Orbán said a politicised commission was now preparing reports on the rule of law regarding EU member states by outsourcing the work to “pseudo-civil organisations” operating in them — all of them part of “George Soros’s network”.

Democratically elected governments were then evaluated using information and opinions provided by these NGOs, with punishments then meted out accordingly, Orbán said, adding that this amounted to “an abuse of the power” — made possible because nation states had handed their sovereign powers to Brussels.

Meanwhile, the prime minister insisted the EU was “destined to fall apart” unless its economy started performing successfully. The EU was based on the idea that member states can achieve greater economic success together than separately, he said.

“If it turns out, economically speaking, that we are more successful … separate than together, the EU will be finished,” he added.

“So those of us who are dedicated to the EU must support policies that focus exclusively on our common economic success,” he said. Brussels, he added, was busy “fighting with itself and its member states, lecturing and threatening them, exerting pressure and imposing fines”.

He called this “a self-destructive abuse of power”.

It was, he added, “vital to maintain security and the success of the global economy in such a dangerous period.” He said a precondition of success was restoring democracy.

The prime minister called for a new institution to be set up comprising the constitutional courts of member states with a mandate to protect their national and constitutional identity.

Orbán insisted the European Parliament had proven itself “a dead-end” of European democracy, pursuing its own ideological and institutional interests.

Orbán said a debate was under way concerning the future of the EU. Finally, he said, it was possible to discuss problems openly as well as those things that citizens of member states find hurtful and harmful.

The debate about the EU’s future has given Hungary a podium from which it can stop the “Sovietisation of the European Union and Brussels turning into Moscow,” he said, adding that Hungarians had fought for their freedom, whereas westerners inherited it; “a world of difference”.

“Times have changed, and whereas thirty years ago we believed Europe was our future, today we understand that we are Europe’s future”, he said.

Orbán said “we must have the courage to be democrats and freedom fighters in Europe; this is the only path towards a European renaissance”.