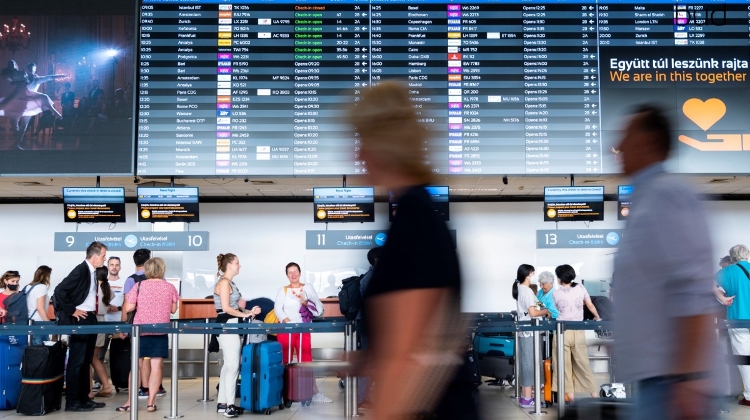 Thanks to increasing vaccination coverage worldwide and the gradual easing of travel restrictions, more and more people choose to travel by air again.

The current dynamic recovery is expected to continue in July and August as the summer season starts. In the first half of the year, Ferenc Liszt International Airport handled 603 585 passengers, almost half of them in the first month of the summer, June.

The passenger numbers of Budapest Airport clearly show the start of the summer season, but vaccination coverage, the easing of travel restrictions and the flights on offer from Budapest to an ever-growing number of destinations also play a key role in traffic growth.

The stagnation of the first quarter of 2021 was followed by mild growth in April and May, but in June, traffic at Budapest Airport already increased to 266 481 passengers, which is more than triple the traffic in May.

Capacity offered by airlines almost doubled in the second quarter compared to last year, and in case of popular destinations, even grew by up to 500%.

In the first three months of the year, daily traffic fluctuated between 2-3000 passengers, which almost reached a daily average of 10 000 in June, and is expected to grow significantly in July and August.

In a quarterly comparison, the second quarter, that is, the spring data, are the most informative: compared to 2020, this spring was 257 percent stronger than the same season of last year.

Soon 120 destinations will be available from Budapest

Recently, airlines reacted to the easing of travel restrictions in a flexible way and gradually rebuilt or increased the frequency of their flights, depending on growing demand for certain destinations when borders were opened or entry became easier.

It was already clear that the willingness to travel did not decrease, artificial travel restrictions held passenger traffic back, but when these were gradually removed, more and more people started to choose travelling by air again, especially to popular destinations.

From Budapest, passengers could fly to 153 destinations before the pandemic, of which 90 were available in June 2021, while up to 120 destinations are expected to be accessible with scheduled flights from the Hungarian capital in the coming months. In June, the airport handled an average of 250-300 scheduled flights weekly.

In addition to these, charter flights to the most popular destinations – the beloved summer resorts of Egypt, Greece and Turkey – restarted as well. In spite of the crisis, Hurghada, Egypt was added to the schedule as a new route last year, and became the most popular holiday destination of 2021.

The Egyptian city is followed by Barcelona and Antalya. Overall, flights to Frankfurt, Amsterdam and London were chosen most often in the first six months of the year.

Chris Dinsdale, the CEO of Budapest Airport said: “In the first half of the year, we strived to rebuild most of the destinations available in the record year of 2019, so travelers departing from and arriving in Budapest could choose from a broad portfolio of destinations.

The EU Digital COVID Certificate regulation which came into effect in early July is a huge step towards recovering European aviation passenger traffic, because the more reliable and predictable travelling is, the more people get on board again.”

He added: “Our job, as airport operator, is to prepare and ensure the infrastructure and sufficient staff numbers to handle the recovering traffic and to create a safe environment for staying at the airport, while paying maximal attention to our passengers and their comfort.”

Travel is increasingly free from 1 July, but gathering information about the regulations of each destination is important

Thanks to the EU Digital COVID Certificate valid from 1 July, passengers who have recovered from coronavirus, been vaccinated with an approved vaccine in the destination country or received a negative PCR test can move freely and safely within the European Union.

In addition to this, according to the bilateral agreements concluded with certain countries, travelling with a Hungarian vaccination certificate is also possible to several destination outside the Schengen zone, but only to those countries with whom vaccination documents are mutually accepted. For all other destinations, the relevant regulations of the specific country must be observed.

Budapest Airport would like to highlight that everyone travelling – either for private or business purposes – should always be aware of the conditions of entering their destination country, and ensure that they have the required documentation.

The website of the Consular Service of Hungary provides reliable and up-to-date information for that.

From 3 July, it is no longer mandatory for passengers to wear a face mask at the terminals of Budapest Airport.

However, it is recommended for travelers to pack one in their hand baggage, since they must wear it on board aircraft and may need it at their destination as well.

It is recommended to arrive at the airport 2 hours before the flight departs, or when it is indicated by the airline, and it is important that passengers should follow the information they receive from airlines accurately.

The airport operator requests that only passengers should enter the terminal, if possible, to minimalize the number of people present in the building at the same time.