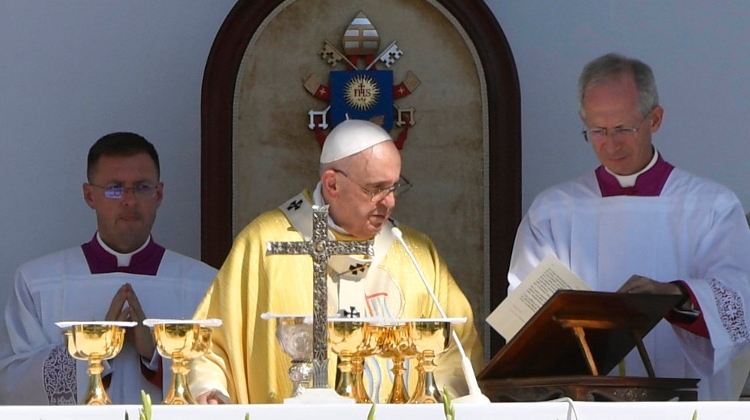 In his celebration of the closing mass of the International Eucharistic Congress in Budapest, Pope Francis expressed his wish that the Cross be "the bridge between the past and the future" for those gathered for the event.

Before reciting the Angelus prayer at the end of the mass on Heroes’ Square, the pope said the feeling of religion was what gave life to the Hungarian nation.

However, the Cross planted in the ground “not only invites us to be well-rooted, but also reaches high and extends its arms to everyone”, he said.

“The Cross invites us to be firm in our roots, but we must not be satisfied with this,” the pope said, adding that the faithful should also “draw from the fountain and give drink to those who thirst in our time”.

“My wish is that you be grounded and open, rooted and considerate,” Francis said.

He said the Mission Cross called on the faithful to preach the Gospel and the message of God’s eternal love.

“In today’s world hungry for love, this is the nourishment that all Hungarians crave,” he said.

The pope thanked what he described as “the great Hungarian Christian family”, which he said he wanted to “embrace in its rites, its history, its brothers and sisters, both Catholic and those of other confessions: all journeying towards full unity”.

Pope Francis highlighted the courage of Saint Stephen, Hungary’s first Christian King, and Elizabeth of Hungary as examples of meeting Jesus Christ at the closing mass of the 52nd International Eucharistic Congress in Budapest on Sunday.

Francis called on the faithful gathered for the mass in Heroes’ Square to “allow the meeting with Jesus to transform us in the eucharist the way it transformed the great and courageous saints whom you respect like Saint Stephen and Saint Elizabeth”.

He said the meaning of God was not found in the catechism but required “a vital personal response”.

The pope said that although the Cross had never been “fashionable”, it brought “inner healing”. He said the debates and fights around the Cross were a clash of God’s logic and the world’s logic. God’s logic, he said, was “humble love”.

God’s path is “free of all compulsions” and seeks what is good for others, the pontiff said. Meanwhile, the world’s logic, he said, sought appreciation, prerogatives, favourable judgement and success. Pope Francis said the difference was not about who was or wasn’t religious, but between the “true God” and “the god of oneself”.

On his way to the mass, Francis Pope Francis greeted crowds in Budapest in the open-topped popemobile. Many in the crowd waved Hungarian, Szekler, Polish, Spanish, Portuguese and Vatican flags. Hungarian public media’s Rome correspondent said Pope Francis called his trip to Budapest “a visit to the heart of Europe”.

The pontiff arrived at Liszt Ferenc International Airport in the morning where he was greeted with military honours and by church and state delegations.

At the airport, Pope Francis was seen off by a church delegation consisting of Michael August Blume, the Apostolic Nuncio to Budapest; Cardinal Péter Erdő, Archbishop of Esztergom-Budapest; and András Veres, the head of the Hungarian Catholic Bishops’ Conference; as well as a state delegation comprising Deputy Prime Minister Zsolt Semjén, Human Resources Minister Miklós Kásler and state secretary for church and minority relations Miklós Soltész.

Pope Francis urged Christians and Jews to take a united stand against anti-Semitism in Europe at a meeting with the delegations of the Ecumenical Council of Hungarian Churches (MEÖT) and Hungarian Jewish organisations in Budapest on Sunday.

The pontiff was in the Hungarian capital to celebrate the closing mass of the 52nd International Eucharistic Congress. In his speech, Francis compared the relationship between Christians and Jews to the Chain Bridge linking the Buda and Pest sides of Budapest.

He said Jews and Christians no longer wanted to see each other as strangers but as friends. The two communities must fight anti-Semitism together to prevent the “waves of hate” from damaging their relationship, he said.

“Only if we become roots of peace and shoots of unity, will we prove credible in the eyes of the world, which look to us with a yearning that can bring hope to blossom,” the pope added.

“Whenever we were tempted to absorb the other, we were tearing down instead of building up,” he said.

Francis noted that Sunday’s meeting was taking place between Rosh Hashanah, the Jewish new year, and Yom Kippur, the Jewish day of atonement. He said people and communities should build bridges while respecting everyone’s religious freedom instead of living in isolation.

In his greeting to the pope, Reformed Church Bishop József Steinbach, who heads the MEÖT, said Pope Francis’s visit to Hungary was a blessing for the country’s Christians. Steinbach said God’s gift of Jesus Christ to humanity mandated Christians to show love to and look out for each other, respect life and protect God’s creation.

The bishop asked for heavenly strength and blessing on the life and service of Pope Francis. The MEÖT presented the pope a facsimile of the Vizsoly Bible, the oldest surviving complete Bible translated into Hungarian.

A message from Chief Rabbi of Hungary Róbert Frölich, who was recently hospitalised, was read out by Chief Rabbi Zoltán Radnóti. In his message, Frölich wrote that despite the conflicts of the past, the common religious heritage and sacred traditions of Judaism and Christianity served as a beacon for the future of humanity.

Jews and Christians both know what it is like to be persecuted for their faith, the chief rabbi wrote, adding that they had also seen many times in the course of history that those who have God’s love and fear in their hearts “see the divine spark in others, respect man and the image of God, and turn to their fellow man with true love”.

Over the past decades Jews and Christians have done a lot to “break down the walls that separate them” and to see each other as friends, he added.

Earlier:
Pope To Attend Closing of Eucharistic Congress in Budapest

Pope Francis announced plans to concelebrate the closing mass of the 52nd International Eucharistic Congress in Budapest on September 12.

The pope said that he would pay a pastoral visit to Slovakia between September 12 and 15.

“We pray that with the easing of the pandemic situation, the visit of the Holy Father will be a sign of hope and a new beginning for us,” Erdő said.

The Hungarian government was “pleased to hear Pope Francis announce his acceptance of the invitation to Budapest and is looking forward to seeing him at the closing mass”, the Prime Minister’s Office told MTI.

In a statement signed by Deputy Prime Minister Zsolt Semjén, they said “consultations on details of the Holy Father’s visit continue in the customary manner”.

The Prime Minister’s Office stressed that they were looking forward to the international meeting of Catholics and the government will provide all the necessary assistance to make it a success.