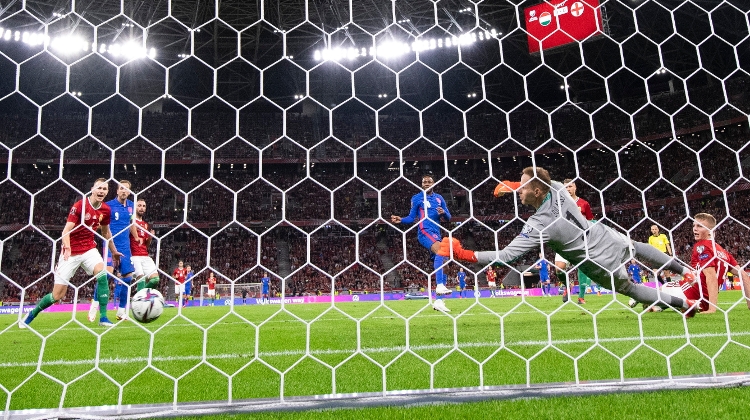 Second-half goals from Raheem Sterling, Harry Kane, Harry Maguire and Declan Rice saw Euro 2020 finalists England eventually cruise to victory in Budapest on Thursday, but hosts Hungary made it difficult for their opponents for most of the first hour.

It was a feverish start in front of a packed Puskás Aréna crowd, as boisterous as ever in support of their heroes of this summer's European Championship.

However, the quality of the football in the first half of this latest FIFA World Cup qualifier didn't quite match the intensity of the home support, neither side managing to create any clear chances as Hungary nullified an England team rich in possession but ponderous in attack.

The second half started in contrasting fashion though. Firstly, Hungary escaped when Kalvin Phillips sent Harry Kane in on goal in the 49th minute, only for the Tottenham striker to scuff the ball weakly at Hungary goalkeeper Péter Gulácsi 14 metres from goal.

England didn't waste their next opportunity though, Jack Grealish releasing Mason Mount down the left and the Chelsea man's cross from the byline being dispatched low into the far right of the goal by Raheem Sterling to give the away side the lead.

That broke Hungary's stout resistance and further concessions were soon to come, Kabe heading in Sterling's deflected cross and Harry Maguire getting enough power on his header from Luke Shaw's left-wing corner for the ball to squirt off Gulácsi's outstretched left hand and squirm inside the far right post.

Kane was then denied by Gulacsi when clean through again 12 minutes from time, but finally Hungary also exerted some pressure, substitute Kevin Varga drawing a save from Pickford from a tight angle and the same player reaching the byline and seeing his pull-back cause momentary consternation in the England defence.

The British FA has asked international federation FIFA to launch an investigation into racist behaviours by Hungarian supporters during a Hungary-England World Cup qualifier played in Budapest on Thursday night.

After the match the British players complained about being loudly booed when they took the knee as a gesture against racism before starting, and said that after each goal plastic cups and other objects were thrown into the field, while racist slogans were chanted.

“Take strong action against those responsible to ensure that this kind of disgraceful behaviour is eradicated from the game for good”.

In response to the critical remarks, Hungarian Foreign Minister Péter Szijjártó posted on Facebook footage taken in London’s Wembley Stadium, in which British supporters are heard whistling during Italy’s national anthem. “Were similar remarks made at that time?” the minister asked.

FIFA rejected all forms of racism and violence in a statement, and pledged zero tolerance for such behaviours.

The federation also pledged to take appropriate action once they received reports on the events.

Hungarian association MLSZ said in a statement that “most of the 60,000 supporters stayed sportsmanlike even when the [Hungarian] team was losing”.

European federation UEFA condemned Hungarian fans for “discriminative behaviours” in July and ruled that the Hungarian team should play three European matches behind closed doors, with one of them suspended for two years.