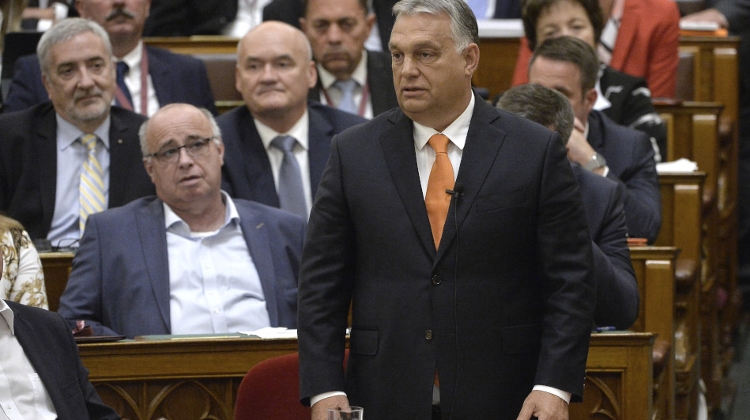 Prime Minister Viktor Orbán, addressing lawmakers during the opening of parliament’s autumn session, said that Hungary's strategy for beating the coronavirus pandemic would depend on its vaccination campaign.

Orbán said vaccinations were the only effective way to tackle the virus, adding that after Hungary’s experiences gained after three waves of the epidemic it had become clear that restrictions and masks were not up to the job of defeating or even slowing down the virus. But if there are enough people who have been vaccinated, a normal life can be maintained, he said.

Concerning booster jabs, he said that “having [the possibility] is better than not”, adding that people who receive a third jab would be “certainly better protected”. So far some 525,000 people have received a booster shot, he said, adding that 17 million doses are available this year.

Orbán noted that the majority of Hungarians were vaccinated and protected from the virus and appealed to people who have not got vaccinated to do so.

Hungary, he added, was prepared to respond to the fourth wave of the virus, noting that MPs have been asked to prolong the special legal order and the special measures related to Covid until the end of the year.

Hungary’s Economy Off to ‘Flying Start’

The economy “has got off to a flying start”, Prime Minister Viktor Orbán told lawmakers, noting that GDP growth was 17.9% in the second quarter, the “highest figure ever recorded”.

Hungary’s economic output has now surpassed pre-pandemic levels, while most European Union countries are “still waiting” to catch up. Orbán added that full-year GDP growth would reach, or could even exceed, the government’s target of 5.5%.

Citing official data, he said more than 4.7 million people had jobs in July, adding that the country had not had this many people in employment since the change of regime in 1989. The economy added nearly one million jobs over the last 11 years, the prime minister said, adding that Hungary was “just one step away from full employment”.

Referring to questions the government put to the public in a recent survey, Orbán told lawmakers that responses to the National Consultation survey “are binding on the government”. By Feb. 15, the government will refund a portion of personal income tax to parents raising children, he said.

Fully 1.9 million parents will receive partial refunds of their 2021 personal income tax payments, a measure that totals 600 billion forints (EUR 1.7bn), Orbán said. Also, pensioners will receive a pension premium that is likely to be over 50,000 forints to make up for higher inflation, he said.

Talks are under way to increase the minimum wage to 200,000 forints, the prime minister said, adding that the chance of a successful agreement was high.

He said the measures built on earlier special support such as the loan moratorium for troubled borrowers and the phased reintroduction of the 13th month pension.

Also, people below the age of 25 will be exempted from paying the personal income tax, while in early 2022 military and law enforcement personnel will get a special allowance for six months, Orbán said, adding that, in accordance with the results of the National Consultation, the government also intends to provide constitutional protection for family benefits, low taxes on labour and pensions.

Turning to the recent developments in Afghanistan, Orbán said Hungary had joined the international military operation there at the request of the United States and had withdrawn its troops in parallel. He said it appeared that the US had “misjudged the situation in Afghanistan”.

The prime minister praised the efforts of the Hungarian troops, saying that he did not believe the threat related to Afghanistan had passed, as the crisis in the Central Asian country could trigger a new migration wave.

Orbán said Hungary was sticking to its policy of strengthening its borders. He said the Balkan migration route was again filling up with migrants who, he insisted, were being aided by organisations linked to US financier George Soros.

Orbán said the number of migrants crossing the border illegally and people smugglers registered by the Hungarian authorities had tripled compared with last year.

“Hungary gets regularly stabbed in the back by Brussels,” Orbán said, adding that the government would stick to its guns and protect the borders in the face of heavy political pressure. He insisted that the bloc’s unity was being “shredded” due to disputes over migration, and only by handing the relevant powers back to member states would that unity be preserved.

Commenting the EC infringement procedure launched against Hungary because of the government’s child protection law, Orbán said: “We won’t allow space for any kind of sexual propaganda targeting our children.”

Orbán told parliament that Hungarian laws that ban sexual propaganda in schools and kindergartens as well as in advertisements were under attack by Brussels, which has formally called on Hungary to amend its laws on public education, advertising and the media.

“Their demands are absurd and run counter to the general belief in Hungary that the sex education of children should be exclusively determined by parents,” the prime minister said, adding that the Hungarian people would have the final say on the issue in a referendum.

Péter Jakab, the leader of Jobbik, said more than 2 million Hungarians lived below the poverty line, while the minimum pension and child allowance had not increased in the last 13 years.

Bertalan Tóth of the Socialist Party said Orbán had made no mention of the 30,000-plus people who died of Covid-19, while the number of people vaccinated in Hungary was “well below” the EU average. He referred to “growing waiting lists” in hospitals and thousands of doctors and nurses quitting state health care in the middle of the pandemic.

LMP’s László Lóránt Keresztes said the prime minister had failed to mention “the transfer of an astonishing amount of public property to [ruling] Fidesz public foundations”, and austerity at local government level.

Ferenc Gyurcsány of the Democratic Coalition said the prime minister was “fighting demons from Brussels”, “a lawmaker called Gyurcsány” as well as “hundreds of thousands of those who want to love freely”.

He said the prime minister had failed to unite the nation and he accused Orbán of having a “party secretary mentality” since he only represented his own party.