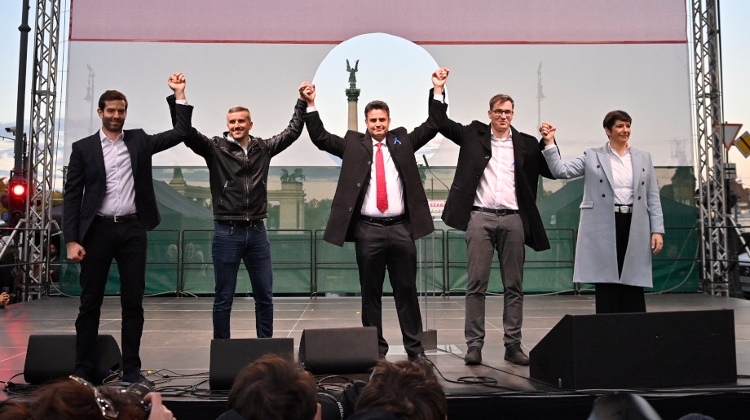 Péter Márki-Zay, the opposition’s prime ministerial candidate, addressing supporters at a commemoration of the 1956 revolution in Budapest on Saturday, said the message of joining together embodied in uprising 65 years ago was still relevant today, and next year’s general election would be a “colossal battle”.

Márki-Zay said the battle was over “the freedom of the Hungarian nation”.

“Together for a Free Hungary!” he declaimed. He called for the ruling Fidesz party to be denied a parliamentary majority next spring.

“With total national unity, now we can demonstrate that we are the majority,” he said, adding that the current power holders were “morally unacceptable”.

Márki-Zay, who is also the mayor of Hódmezővásárhely, said the opposition’s current battle should be inspired by the youth of 1956, “but it should also be peaceful, not armed”.

“We’re fighting for a country of love,” he said, adding that for this, every single Hungarian was needed.

Speaking at the joint event of Hungary’s opposition parties, Márki-Zay said that people today were as sick and tired as they had been in 1956. They were fed up, he insisted, with the “party state”, with “falling behind the West”, and with “poverty, intimidation, political cronyism, mounting Russian influence and hate campaigns.”

“Only together can we win,” he said, adding: “Go Hungary! Go Hungarians!” Márki-Zay pledged to hold a referendum on adopting a new constitution and an independent judiciary, and he vowed for Hungary to join the European Public Prosecutor’s Office.

He promised freedom of the press, the autonomy of local government and a new electoral law. He also vowed that Hungary would join the single currency. The prime ministerial candidate also promised to keep Hungary’s fence on the southern border intact. But, he added, “criminal migrants imported by Fidesz” would be expelled from the country.

Officials who had profited from migration and deals to import the Chinese coronavirus vaccine “for double the market price”, as well as ventilators that went unused, would be held accountable, he said.
Márki-Zay said Hungary would be a place in which skin colour nor race would not be factors in determining a person’s opportunities.

“Even Fidesz politicians” would be free to declare their homosexuality, he added. He insisted that Prime Minister Viktor Orbán’s family and friends were also in the fight for the country, “so we must be ready for lies and slander campaigns”.

He said the opposition would be landed with accusations of “settling migrants”, plans to “put up prices” and of conspiring with [former Socialist prime minister] Ferenc Gyurcsány, against whom, he added, allegations of corruption had been left unproven after 12 years.

Referring to government tax and support measures announced before the election, he insisted Fidesz “has even started working for you” under the pressure of a resurgent opposition. He said young people would have the biggest role to play in spreading the opposition’s message ahead of the election.

Jobbik leader Péter Jakab noted that a year ago six opposition party leaders vowed to put their candidates running for the post of prime minister on a common stage today.

“Here were are; we’re together and we’ll win.” Klára Dobrev, the Democratic Coalition MEP who lost to Márki-Zay in the primary run-off, said that being democrat meant embracing diversity and encouraging diversity in everyday life. This, she added, would be a great strength in the battle with the “monolith system of Viktor Orbán”.

“Next spring, we either win together or we all fail. This is our responsibility,” she added. Gergely Karácsony, the mayor of Budapest who stepped aside before the run-off, said the opposition was getting ready for “a gentle revolution” in the spirit of fulfilling the promise of October 23 1956 and 1989.

He insisted that October 23, 2021 marked the birth of “the fourth republic”, making Hungary “our common homeland once again”.

All those who competed in the opposition’s primary then took to the stage together at the end of the event.