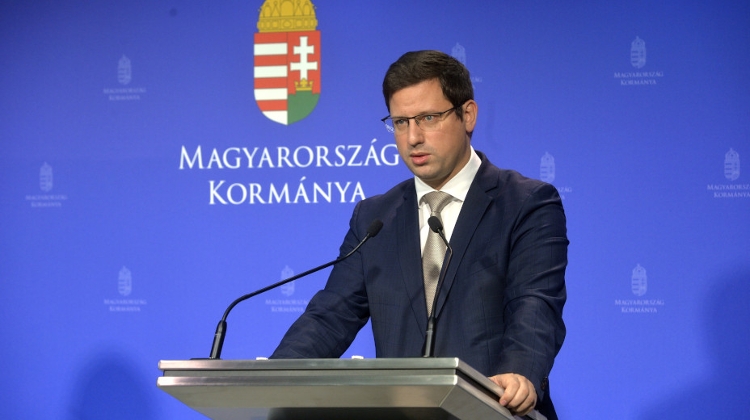 The humanitarian impact of the “unfortunate pull-out” of international forces from Afghanistan, as well as developments at the Belarus-Poland border, are elements of a migration crisis facing the bloc, the prime minister’s chief of staff, Gergely Gulyás, said.

“It is important that Poland receives all assistance that Hungary was denied in 2015, when it started protecting the EU’s southern borders”.

The EU must reimburse countries protecting its external borders, Gulyás insisted. Hungary requested a reimbursement of 580 billion forints, but has not yet received a response from the European Commission, he noted.

The minister called protection of the EU’s borders a “patriotic duty”, adding that the government would ensure that the necessary resources are in place.

The interior ministry is planning to reinforce border controls and recruit volunteers, who would be deployed after a fast-track course, he added. Gulyás also noted that the number of illegal entry attempts had shot up, from a daily 350 in 2020 to more than 1,000 at present.

Meanwhile, on the topic of Covid, Gulyás noted that the level of antibodies begins to wane six months after a second shot of a Covid vaccine, and may drop drastically after 7-8 months, which is why the government advises Hungarians to get a booster jab.

The fourth wave of the pandemic is different from previous waves because “this time we have a weapon to fight the virus in the form of vaccination,” Gulyás said.

One in 100 people inoculated against Covid gets ill, but with much milder symptoms than those who have not received any shots at all, he said.

Gulyás advised Hungarians to get a third jab, citing a study released by Pfizer last week which said that the vaccine starts losing its effect after six months. “Anyone who has been vaccinated is still in a better position after the eighth and the ninth month than one who has not received a jab,” he added.

The government is launching a week-long nationwide vaccination drive on Nov. 22, with 101 vaccination points administering a first, or a second or a booster shot without preliminary registration, Gulyás said.

“It is particularly important that a substantially high number of people get a booster jab with a focus on immunocompromised people in the older age group,” Gulyás said.

In terms of health services, Gulyás said Hungary has sufficient resources and supplies available, adding that “no disruption or emergency is expected to emerge”.

Gulyás said the government has no plans to make vaccination mandatory, but would leave the option of ordering workers to get inoculated open to employers.

But state employees who come into contact with a great number of people should certainly get vaccinated, he said, noting that this is why staff working in regional government administration offices overseen by the Prime Minister’s Office are required to get vaccinated by no later than Dec. 15.

Staff working in positions where they meet a fewer number of clients on a daily basis are required to receive a first jab by no later than Jan. 31, he said.

Gulyás welcomed that the full vaccination rate among health-care sector employees is high at almost 100%, though he cautioned the sector’s workers to receive a booster jab.

Concerning Covid jabs, Gulyás said the government will approve the vaccination of 5-11-year-olds once it is approved by either the Hungarian or European drug regulator.

Gulyás said the National Public Health Centre (NNK) had carried out a study on the efficacy of the Sputnik jab at the request of Russia. He said the government had ordered the same for all vaccines.

Asked about the possible need to administer a fourth jab, Gulyás said the question needed to be studied by medical professionals, but Hungary had enough vaccines in stock if more inoculations became necessary. He said some people may require a fourth jab and there was no rule against administering one.

Asked about the potential epidemiological risks posed by Friday’s FIFA World Cup qualifier at Budapest’s Puskás Arena, Gulyás there was minimal risk involved for any spectator who had received three vaccine doses, but he would “not talk anyone out of wearing a mask”.

“It appears he is in favour of Poland’s border protection efforts, not just from a political, but also from a financial point of view,” he added. Gulyás insisted that the EPP had ceased to be a “major political force” in western Europe. The conservative grouping’s policies of the last ten years, he said, had led to there being no EPP member party in power to the west of Austria.

Meanwhile, he said remarks from the three parties working to form Germany’s next governing coalition indicated that they intended to “encourage all forms of migration”, which he said could also impact Brussels’s migration policy.

Asked about a statement by Lajos Kósa concerning the Pegasus spyware, and whether his statement fell foul of official secrets rules, Gulyás said it was up to the authorities to decide whether the statement amounted to a criminal offence. He added that no state gave information on the technology or technical means used to collect information in the secret domain.

The issue, he said, had turned into a political football because the left wing and Hungarian left-wing journalists had made it into one. Gulyás insisted that no illegal secret information gathering had taken place in Hungary since 2010. The way in which secret information is handled is strictly regulated, he said.

On the subject of climate change, Gulyás said Hungary was among the few countries that had kept to its emission reduction targets, and this would have been impossible without nuclear energy.

He said the issue within the EU was controversial, but Hungary was not the sole operator of nuclear energy in the bloc. Ten member states, led by France, have turned to EU institutions with the aim of recognising nuclear energy as climate friendly, he said.