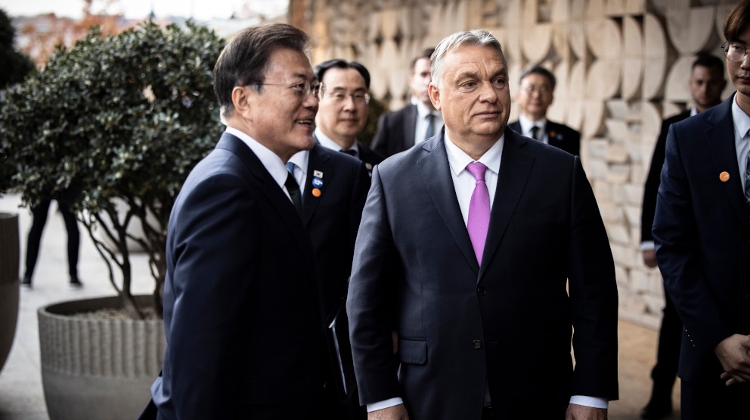 Prime Minister Viktor Orbán expressed hope that the visit of South Korean President Moon Jae-in will further elevate ties between Hungary and the Republic of Korea, at their a meeting in Budapest on Wednesday.

At the talks, Orbán said he was pleased to learn that South Korea regards Hungary a prominent partner.

“We are amazed to witness that South Korea with its fifty million inhabitants has become one of the world’s leading powers in technology,” Orbán said.

He praised South Korean companies in Hungary for their “fantastic investments” and for their discipline as business partners. “We very much like cooperating with them,” he said.

Moon thanked Hungary’s help and action provided after a deadly boat collision on the River Danube which took the lives of many South Korean tourists three years ago.

He said that the Hungarian prime minister had provided every possible means to help the search and rescue operations.

Negotiations on setting up a large Korean university campus in Budapest have begun, Prime Minister Viktor Orbán said on Wednesday.

Addressing the opening of a V4-Korea Business Forum in Budapest, Orbán said that the existing good and friendly relations between Hungary and the Republic of Korea would be raised to a strategic level and economic relations would be expanded to include science, research and education.

Orbán said his government had looked to South Korea as a “success story” to learn from when it returned to power in 2010.

Orbán said the country offered an example of how tradition must be combined with technology, family must be “placed above all”, the economy is work-based and there is life-long learning, national identity is strong, regional logistics advantages are put to use, and planning is for the long term.

Orbán noted that bilateral trade between Hungary and South Korea has grown by a factor of ten in the past decade. South Korean companies are the fourth-biggest group of investors in the country and have projects worth 4 billion dollars underway, he said.

Talks are ongoing on the launch of a further 16 big South Korean investments, he added.