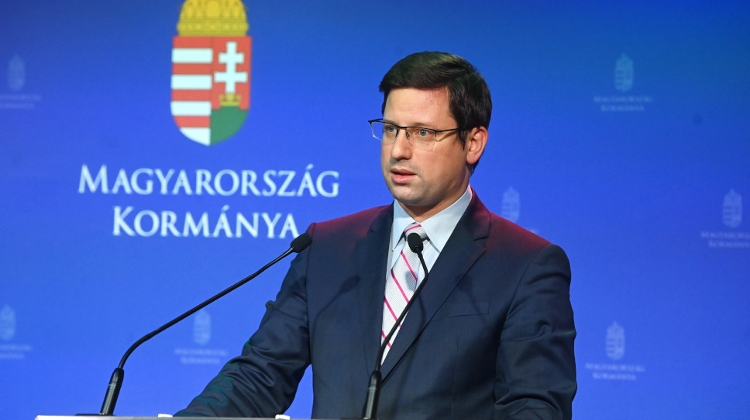 People who refused to be vaccinated put the health and lives of others at risk, Gergely Gulyás, the prime minister’s chief of staff, said, adding that the government had been forced to make mask-wearing compulsory for this reason.

From Nov. 22 to 28, the government is rolling out a vaccination campaign with an increased number of designated vaccination points in hospitals, with no requirement for registration, he added.

It was worth holding events that are accessible using an immunity card, adding that this would also send a message that inoculation is truly protective, he said.

Asked about whether online education could make a comeback, he said: “If schools stop, everything stops”. Conditions are in place for classrooms to remain open, he said.

Pending the decision of the European authorities, approval for vaccination of children under the age of 12 years could arrive in December, he added. Hungary, he confirmed, is sending ten doctors to Slovenia to help amid the serious epidemic there.

Meanwhile, Gulyás said that while the incumbent Fidesz government holds power, capped utility bills would be here to stay.

Gulyás said it was welcome that the price of fuel at the pump had been capped throughout Hungary thanks to government intervention, and that all fuel stations had complied.

The tax authority will be checking fuel quality from Wednesday, he added. Small businesses will be given the opportunity to join a universal energy provider so as to benefit from lower bills, he said. Lower overheads and fuel prices will help to keep inflation in check, Gulyás added.

Commenting on the reports concerning alleged plans to sell Budapest’s City Hall, he insisted that the administration of Gergely Karácsony was in a state of “chaos” and, given the mayor had publicly rebuked a subordinate, the question of his credibility was hanging in the balance.

Also, there was the question of whether he had been in possession of the relevant information, he added.

Whereas Karácsony had promised to create a park in the courtyard of City Hall and renovate the building, it transpired that the courtyard would continue to serve as a car park, while the building was in a worse condition than ever, Gulyás said.

Commenting on statements made by Péter Márki-Zay, the opposition alliance’s prime ministerial candidate, who has cast doubt on the government’s scheme to regulate utility bills, Gulyás, referring to the former Socialist prime minister, said “Ferenc Gyurcsány’s candidate” had admitted to continue with policies pursued between 2002 and 2010 when the price of electricity doubled and the price of gas tripled.

The average Hungarian household would pay 400,000 forints more each year if market prices were passed on to them.

Regarding the Stop Soros package of laws which the European Court of Justice ruled unlawful, Gulyás said the government was examining the ruling. He added the government considered the European Commission’s “stand in favour of migration taken within a single week of the court’s ruling” to be “a serious mistake”.

Gulyás said the EC should follow the instructions of European government leaders and draft a clear set of rules to advance the protection of the EU’s external borders.

Commenting on the situation on the Poland-Belarus border, Gulyás noted that German Chancellor Angela Merkel was handling the diplomacy, and “Hungary knows what its weight is,” though if a request was received, he added, Hungary would not hesitate to step up. Every possible support for protecting the external borders should be provided, he said.

Asked about recent legislation on changing address rules for voters in the general election, Gulyás said the new rules did not offer any greater room for manoeuver that those up to now. Neither did they connect with the right to vote, he insisted.

The government estimates that 1.5-2 million people live somewhere other than at their declared address, he added. During the five-week parliamentary session, no objections to the amendment were made, he said. A debate emerged only later, when an organisation linked to George Soros complained about the new law, Gulyás added.

Responding to a question on the economy, Gulyás said the government considered it important that certain sectors of the economy should be in Hungarian hands to a sufficient degree, and more must be done to achieve this in the food industry and retail.