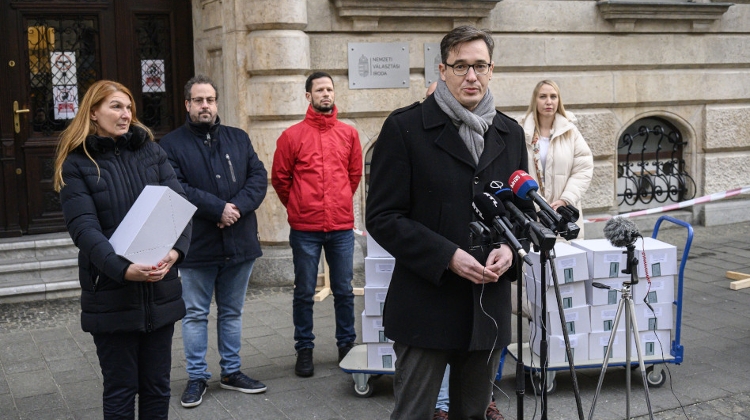 The six opposition parties officially launched on Thursday their signature drives for planned referendums on the Budapest campus of China’s Fudan University and on extending the eligibility period for jobless benefits.

Hungary’s supreme court, the Kúria, last week granted its approval to referendum questions aimed at preventing property from being transferred to Fudan University and at extending the job seekers’ benefit to nine months from three.

At their joint press conference, senior officials of the parties called the referendums a tool of changing government or a precursor to that event.

Ágnes Kunhalmi, the co-leader of the Socialists, said the “democratic opposition” was carrying on with its work with the next task being the referendums after a successful primary. “And then the next to come will be changing the government,” she said.

Antal Csárdi, the deputy group leader of LMP, underscored the importance of building a student quarter instead of the Fudan campus.

Dániel Z Kárpát, Jobbik’s deputy leader, called the Orbán cabinet tight-fisted and “Europe’s most cruel government”, accusing it of having abandoned people who lost their jobs due to pandemic and instead supporting “its own oligarchs”.

The government, he added, had “tied Hungary to the East instead of the West” against the interests of young people.

The parties now have 120 days to gather 200,000 supporting signatures, which the National Election Office (NVI) will then have 60 days to review.