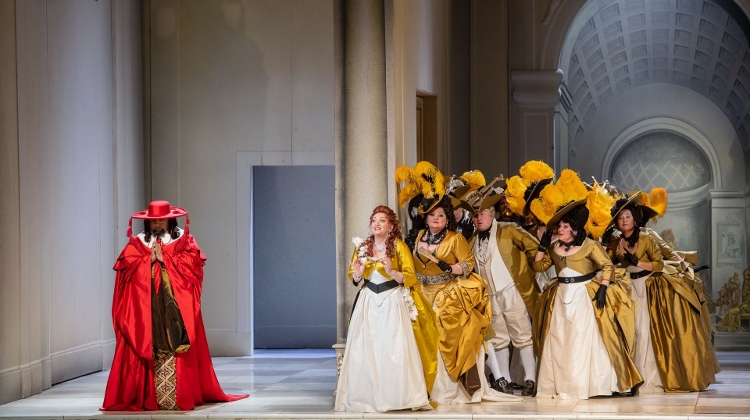 The new Hungarian State Opera production of Andrea Chénier, the masterpiece by Umberto Giordano is available to view on OperaVision until 2 January 2022.

The recording of the 29 May premiere staged by Fabio Ceresa stars outstanding Hungarian soloists Boldizsár László, Eszter Sümegi and Michele Kalmandy under the baton of Balázs Kocsár.

“The revolution has no need for poets!” Supposedly these were the public prosecutor’s closing words when the Revolutionary Tribunal condemned Andrea Chénier to death during the bloodiest period of the French Revolution.

In Giordano’s work, Chénier’s fate transcends actual events and becomes the story of a tragic love triangle in which the lives of the protagonists are subjected to the forces of history, betrayal, and amorous passion.

The music by Giordano captures the atmosphere of Paris perfectly both before and during the French Revolution. Along with presenting elegant aristocratic dances and popular revolutionary songs, such as La Marseillaise, he also endows the main characters with melodies of irresistible beauty.

The production by director Fabio Ceresa evokes the hardship experienced by the protagonists during the French Revolution and attempts to establish a universal cycle of historical transitions: monarchy, tyranny, revolution, terror, and chaos leads once more to the resurrection of a monarchy.

The spectacular sets and costumes reminiscent of the age were designed by Ceresa's regular team including Tiziano Santi and Giuseppe Palella as well as choreographer Mattia Agatiello.

The title role of the premiere recording is sung by Boldizsár László, Maddalena de Coigny is performed by Eszter Sümegi, the scheming servant Carlo Gérard is performed by Michele Kalmandy.

The OperaVision platform offered by Opera Europa, the European association of opera companies and festivals started in autumn 2017 to promote the genre among opera lovers and novices.

Supported by the European Union's Creative Europe programme, OperaVision brings together 29 partners from 17 countries and invites you to travel and discover the diversity of opera from wherever you want, whenever you want.

Previous contributions by the Hungarian State Opera included Hänsel und Gretel by Humperdinck, Bánk Bán (The Viceroy Bánk) by Erkel and L'oca del Cairo, ossia Lo sposo deluso by Mozart, all of which were available to watch on www.operavision.eu.