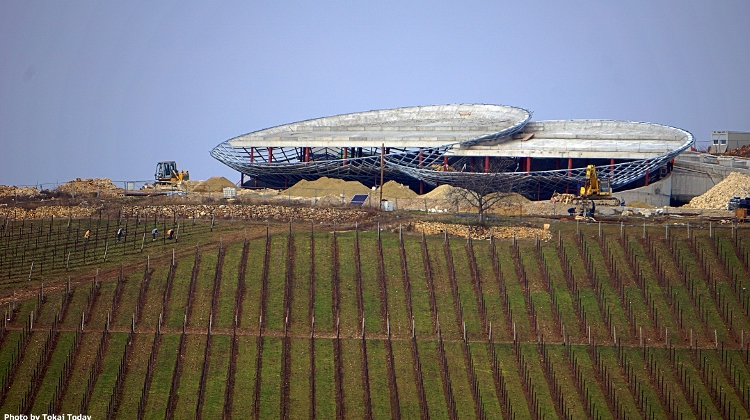 Set on a hillside that belongs to Rátka, but overlooking the village of Mád, Sauska Tokaj’s new winery complex is now taking shape, with the framework of the two main above-ground structural elements starting to be dressed in concrete.

These circular structures, 36 metres (118 feet) in diameter each, are going to accommodate offices and a visitor centre with a wine shop, a sparkling wine bar and a high-end restaurant, while winemaking facilities will be mostly underground below and behind them.

Construction started early last year and is expected to be completed by May 2022. The total project value is estimated at around 3 billion HUF (8.3 million EUR).

The design clearly represents a diversion from the evolutionary architecture that has, over the past thirty years, become sort of the norm in the Tokaj region, resulting in buildings of traditional shapes, proportions and materials, which fit neatly into the World Heritage landscape of the wine region.

That said, the above-ground parts of Sauska’s bold, new winery are going to have a green roof and stone tiling, as well as appropriate adjacent landscaping to blend into the natural surroundings of Padi Hill.

Owner Krisztián Sauska is an entrepreneur and investor, who has two major wineries in Hungary, one in the Vlllány Region in the south-west of the country, and one in the Tokaj region.

His Tokaj winery was established in 1998 and has an annual production of around 180,000 bottles, exported to nearly a dozen countries from their current place in the centre of Tokaj town.

Sauska is known to grow and vinify international varieties that are not authorised for the Tokaj appellation, such as Pinot Noir, Sauvignon Blanc and Chardonnay, as well as for a strong focus on sparkling wine production.