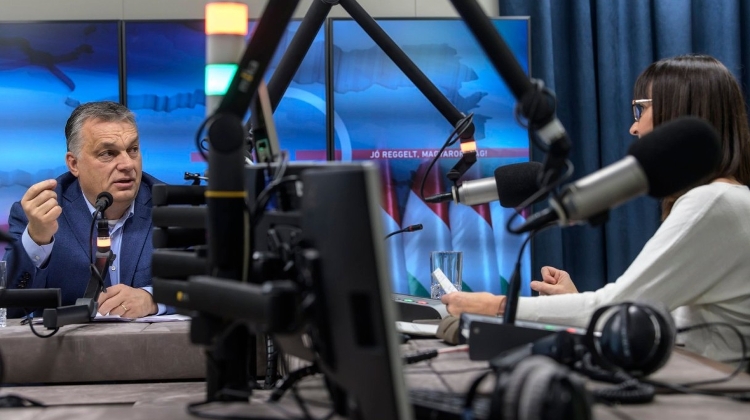 Referring to the election campaign, Prime Minister Viktor Orbán said in an interview with public broadcaster Kossuth Radio on Friday that “Hungary is going forward, not backwards”. “In 2010, Hungary was bankrupt; it had been ruined and bled dry,” he said.

“In the past 12 years, Hungary has worked very hard to correct the mistakes and sins of the previous left-wing governments,” he said. Orbán said that those who “drove the country to bankruptcy then” now claimed to be ready to take the helm again.

“That would mean going backwards”. When the left wing was last in power, unemployment was over 12% and the economy was contracting in 2010, with “sky-high taxes and the IMF breathing down our necks”, Orbán said.

At the same time, “the left-wing parties that are now slamming the health-care system took away one month’s wages from health-care workers and teachers, and one month’s pension from the elderly,” he said.

The ruling government is giving back the 13th month pensions and has regularly raised the minimum wage and salaries in certain sectors, he said, adding that the labour market was now tight, tax rates were “very good in European comparison, and economic growth is around 7% rather than minus 2% or 3%,” he added.

Orbán slammed the leftist opposition for “attacking coronavirus protection measures in a way that offends doctors and nurses, and degrades the work done in hospitals.”

Hungary’s health-care system is working hard to help all those in need, and workers deserve commendation for that, he said. The vaccine rollout is going well everywhere, he added.

While discussions on the best way to organise pandemic protection efforts are useful, the Hungarian opposition “falsified facts, produced fake videos and weakened the effectiveness of the protection efforts,” he said. “The left wing cannot differentiate between attacking the government and degrading the country,” he said.

Meanwhile, the prime minister said he was against privatising health-care services, while “health privatisation has persistently been included in the left-wing programme because many of them have lobbied for business groups interested in a private health care … they have an interest in opening up business opportunities for international investors.”

While Hungary is “on the right track, it is far from being a rich country yet,” he said, adding that the privatisation of health care would mean low earners being left without health services.

The government aims to ensure the best possible services through a state-owned and state-controlled health system, Orbán added.

On the subject of migration, Orbán said that while Hungary was working to protect the whole of Europe, Brussels was failing to contribute to efforts to curb illegal migration. “Indeed, it is attacking Hungary,” he said.

Orbán said that 122,000 illegal entrants had been apprehended in 2021, up from 45,000 the year before, which “clearly shows that the number of illegal entries is on the rise”.

The problem of illegal migration “is far from being resolved,” Orbán said. “On the contrary, it will be with us in the next few years,” he said. Border controls, he added, must be strengthened. “New forces must be recruited: we need as many troops as possible just for border control,” the prime minister said.

Orbán said Hungarians were “in charge of the fort”, protecting the borders of the whole of Europe. Hungary has racked up a bill of 600 billion forints (EUR 1.7bn) since 2015 doing so, he said. “But Brussels isn’t helping with these efforts; on the contrary, it is shooting us in the back,” he said.

“Hungary will not be a migrant destination”, Orbán declared. “We will never say that Muslim adults can replace Christian children… we don’t want to leave the country to foreigners but to our own children.”

On the subject of the coronavirus situation, Orbán said that the number of new cases was on the rise, but fewer people needed to be intubated on a ventilator and the number of hospitalisations was significantly lower than new infections.