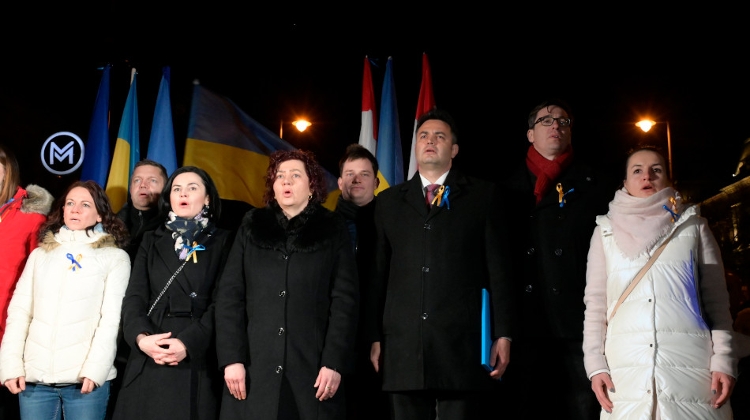 The united opposition held a demonstration in front of the Russian embassy in Budapest under the motto “Against Putin, for Ukraine” late on Thursday.

Márki-Zay said Hungary should fully support the European Union’s sanctions against Russia. He also demanded that the government should suspend the licencing procedure of the project to expand the Paks nuclear power plant and expel the International Investment Bank, which he called a “Russian spy bank”.

In addition, the politician called on Foreign Minister Péter Szijjártó to return an award recently received “for serving Russian interests”.

"Hungary’s place has been in western Europe, with Christian roots, since King Saint Stephen; the West is our ally, and we are members of NATO and the European Union,” Márki-Zay said.

Ágnes Vadai, deputy leader of the Democratic Coalition, said that the government “should bear in mind that Hungarians stand for peace and Europe”.

LMP co-leader Máté Kanász-Nagy said it was “shameful” that, although the prime minister had condemned the Russian attack, he also voiced support for “continuing business with Putin”.

The Paks nuclear power plant upgrade project “should not be revised but dropped”, he insisted.

Socialist co-leader Ágnes Kunhalmi said both Russian President Vladimir Putin and Orbán were “unreliable”, and insisted that a government change in Hungary would “benefit the whole of the EU”.

Jobbik deputy leader László Lukács said “Hungarians, Europe, and the sane half of the world support peace and will continue to do so”.

“There will be no unity in Europe as long as Orbán is in government,” she added. Budapest Mayor Gergely Karácsony, co-leader of Párbeszéd, said “we are not protesting against the Russian people but Russia’s dictator”.

He accused the Hungarian prime minister of “contributing to the oiling of the power machinery now occupying Ukraine for the past 12 years”.

“The Orbán government is not a tool for peace in Europe but an obstacle,” Karácsony said.