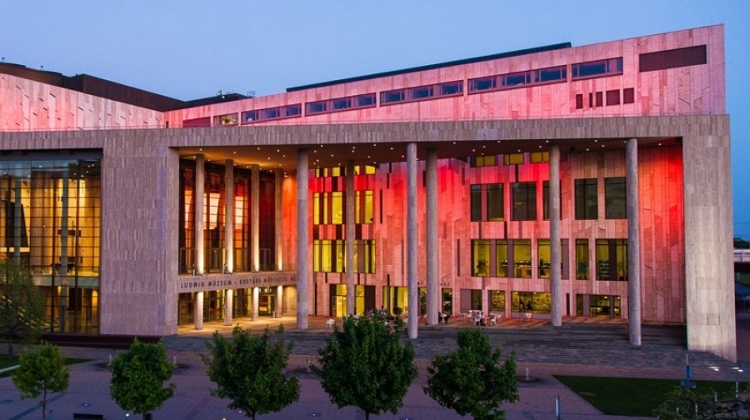 Ludwig Museum found the concept and practice of resilience (flexible adaptation to environmental conditions) expressive as an overarching-theoretical-strategic framework for the 2022 exhibition year.

The exhibitions present sub-themes that interpret the contemporary lifeworld as an extended meaning. Sustainability is future-proof with a resilient attitude. It is an effective tool for formulating and delivering valid cultural messages.

Krisztián Frey (1929-1997) was one of the outstanding representatives of Hungarian neo-avant-garde art in the 1960s and an early Swiss pioneer of international computer art. With this major exhibition of his life's work, the museum is paying off an old debt. Frey entered the progressive art scene in the early 1960s with a self-developed abstract expressionist formal language as a member of the Iparterv generation.

Selected from prestigious museums and private collections in Hungary and abroad, this exhibition of Frey's oeuvre unfolds in unprecedented depth, from early works unknown to the profession, to major works produced in Switzerland and at home, to pioneering experiments in computer art.

The exhibition includes works by progressive artists of the neo-avant-garde, as well as conceptual tendencies of the seventies with works never shown before, and the artists of the BOSCH & BOSCH group from Vojvodina, juxtaposed with the activities of the Pécs Workshop.

The works of young artists of the painting turn that became more and more prominent at the end of the 2010s are shown in a separate room, and Slovak, Ukrainian, Estonian, Polish, Russian and Albanian artworks are presented in thematic blocks, in comparison with similar Hungarian endeavours.

Works on women’s role models as well as on individual and collective historical memory/traumas, mainly based on photography, will be presented as a separate theme through works by Hungarian, Slovak, Romanian and Russian artists.

The (self-)portrait and its absence, the difficulty and loss of “representability” or painterly identification, as well as the position of the artist and art in society, or the disappearance of the traditions of landscape and genre painting, the relationship between the three dimensions and the plane, all form a separate unit.

The exhibition explores the issue of the permanent transience that we experience today, both on a global and personal level. Partly due to technological progress, partly due to the evolution of social and biological systems, not only has the present become unpredictable and uncertain, but the future looms as an apocalyptic endgame.

However, transience also holds the potential for choice and change, which can derive its power from the very ground of this prolonged state and creatively mobilise this power. By capturing the present moment and extending it, the works on display offer possible alternatives in the face of our ever-changing everyday lives.

The international group exhibition will use a variety of techniques and media (installation, multimedia) to capture and convey states of transience.

The international group exhibition entitled Emplotment focuses on the reworking and performative representation of trauma sources using the tools of visual art. The exhibit will examine how the role of the artist has changed in recent decades and what new approaches and perspectives have emerged in the field of trauma processing. Although the analysis of the relationship between art and trauma has a long history, the exhibition emphasises the relational aspect beyond the issue of representation and representability.

As a harbinger of the (supposedly) imminent arrival of the Singularity, the exhibition explores the powerful impact of technological development on our daily lives.

One of the defining global phenomena of our time is digitalisation, which has transformed human life in an evolutionary leap over the past decades, rewriting centuries of fixed habits, forms and behavioural patterns.

The digital turn is still ongoing, with our lives moving from offline to online, and the digital presence growing rapidly. Digital technology in its current state is a new normativity that is part of work and life: not an enemy, not a friend, but a natural part of life...

The diorama and its cousin, the peep-box, take a variety of forms, both in art and in its border areas: from conveying scientific or social messages to pop art and the grotesque. The common feature of the different dioramas is the crossing over into another dimension. Similar to children’s dollhouses, the diorama is an attempt to interpret the unfathomable outside world by reducing it to a manageable size, rendering it harmless and bounded, and bringing it fully under human control.

After Dreams: I Dare to Defy the Damage
Exhibition at the 59th Venice Biennale of Fine Arts, Hungarian Pavilion
15 December 2022 – 26 February 2023

This year, the Hungarian Pavilion at the 59th Venice Biennale will feature a solo exhibition by Zsófia Keresztes, entitled After Dreams: I Dare to Defy the Damage, which could perhaps never be more topical than after the pandemic crisis. The exhibition seeks to explore the ambivalent relationship of past and present to the future and the stages of finding identity in four major units. After Venice, the exhibition will be presented in Budapest, as usual.

Time Machine. New selection from the collection of the Ludwig Museum until 8 January 2023

The time machine is a device, as yet only theoretical, that allows us to transport our physical bodies into the past or the future. However, the exhibition is not concerned with the science-fiction possibility of time travel, but explores the relationship between time and art from different perspectives, and considers the works themselves as time machines that allow us to travel mentally.

The exhibition was created in the short break of the pandemic, in extraordinary circumstances, and could not fail to draw lessons from the past. The museum's collection of some 800 pieces includes works that explore different aspects of personal, artistic and historical time from the curator's personal point of view.