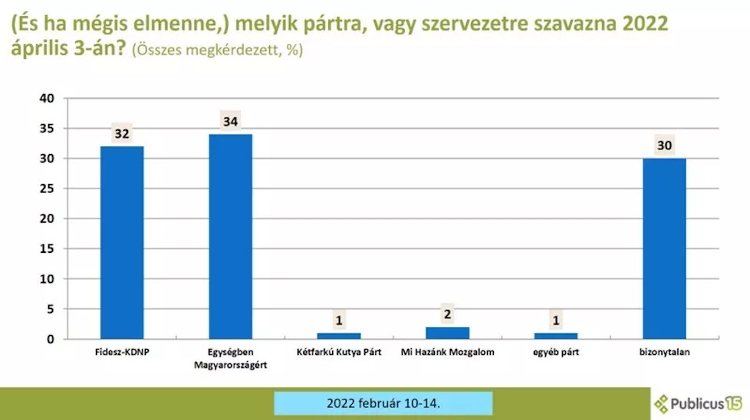 If parliamentary elections were held this on Sunday, 34% of Hungarians would vote for the United for Hungary opposition alliance and 32% for the currently-governing Fidesz-KDNP coalition, according to the latest Publicus poll of 1,000 respondents commissioned by Népszava.

Conducted between February 10-14, the poll gives a slight advantage to the opposition, though still within the margin of error.

Even with this lead over Fidesz, the united opposition likely still wouldn’t win any extra seats in Parliament due to distortions in the electoral system.

The poll also showed 2% in favor of Our Homeland, 1% support for the Hungarian Two-Tailed Dog Party, and 30% of respondents undecided about their party preference.

On the graphic: Which party or organization would you vote for on April 3, 2022?
(from left) Fidesz-KDNP, United for Hungary, Two-Tailed Dog Party, Our Homeland Movement, other, undecided.

Breaking down the undecided voters, 27% of this group said that they would prefer a new government in power, while 17% were satisfied with Fidesz in government. The remaining 56% did not offer an opinion on this question.

In the latest public opinion polls measuring party preference, the Publicus poll shows the most favorable result for Hungary’s political opposition. Most other recent polls have given Fidesz a lead over its opponents.