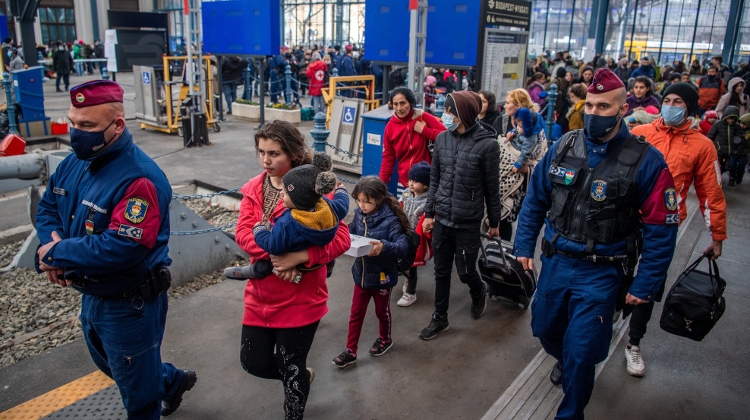 Hungary’s top priority is to stay out of the war between Russia and Ukraine, Prime Minister Viktor Orbán told a congress of farmers’ association Magosz and the National Agricultural Chamber (NAK) over the weekend.

“We condemn war, especially now that it’s taking place in our neighbouring country; we say no to violence, and all of this is important, but the most important thing is for Hungary to stay out of this armed conflict,” the prime minister said.

Orbán said all wars could be examined from several different perspectives, and should be, but only one perspective mattered when it came to making decisions. “We can only look at it through one kind of glasses: the Hungarian kind.”

He said the government had “taken no wrong steps” over the past several days and would not do so in the coming weeks either, because “we’ll be able to remain calm even in the most difficult moments”.

“We won’t change our perspective … on war for any other kind of foreign perspective recommended from abroad.”

The prime minister said it was important for the government to continue making decisions in the months ahead that would prevent “Hungarians paying the price of war”. He said that due to the war the government would need to adjust Hungary’s entire foreign trade strategy to the new situation.

All Must Be Done To Restore Peace, Says FM Szijjártó

Everything must be done to restore peace, Foreign Minister Péter Szijjártó said in an interview to the Saturday edition of local daily Veszprémi Napló in connection with the war between Russia and Ukraine. The minister said it was heart-warming to see how quickly Hungarians had come together in reaction to the situation.

Concerning the ongoing election campaign, Szijjártó said: “There’s a completely new situation since nine days ago: a war has broken out in our neighbouring country.” He said the opposition’s approach to the war “clearly shows how much danger this country would be in if the left-wing leaders took control”.

“Irresponsible remarks could put this country in serious danger,” Szijjártó said. “In a situation like this, no government could strive for anything other than protecting the people and ensuring that their country won’t get dragged into the war.

Yet the opposition wants to send troops and weapons to Ukraine and would allow weapons to transit the country,” he said. Szijjártó said that on April 3 voters would have to decide whether they want a responsible government in power which had the interests of Hungarians at heart or a government which “is even willing to risk the security of the Hungarian people to conform to some sort of international expectations”.

Szijjártó said no one could predict how long the war would go on for. “We’re hoping that it ends as soon as possible,” he said. “The only way that happens is if the opposing sides sit down for negotiations and the negotiations result in an agreement.

People are dying from the horrors of the war every day, so every single day and every single minute matters, because even if the war ends just one minute sooner, fewer people will die.”

The minister said that a war in its neighbouring country constituted a risk for Hungary. “Therefore it’s very important that we speak clearly because in a situation like this, one clumsy or irresponsible remark can easily drag a neighbouring country into a war,” he said.

“That’s why we’ve made it very clear that we won’t send weapons to the war and won’t allow weapons to transit the country. The reason why this is important is because military deliveries of lethal aid are military targets for destruction, so it’s a risk to have such deliveries move across the country,” Szijjártó said.

“Even if the consignment isn’t attacked in Hungary, Transcarpathia is still the first Ukrainian territory which it would have to cross, so allowing weapons to transit the country would endanger Hungarian lives.”
Meanwhile, Szijjártó said Russia had always honoured its economic agreements with Hungary.

“We hope it stays that way. If it doesn’t, there’ll be big trouble. More than 40% of Europe’s natural gas supplies are imported from Russia. In Hungary’s case, more than 80% of gas needs are sourced from Russia,” the minister said.

“If the opposition’s proposal to cut Russian gas imports were to be implemented, Hungary would be left without heating, industry couldn’t function, so there wouldn’t be any jobs and businesses would fail,” he said.

Hungary’s interest lies in keeping gas supplies flowing, Szijjártó said. This, he said, was in line with Europe’s rules given that Russian energy giant Gazprom has not been hit by the European Union’s sanctions and the company’s bank has not been excluded from the Swift international payment system.