'No NATO Could Protect Us Against Our Own Stupidity', Says PM Orbán 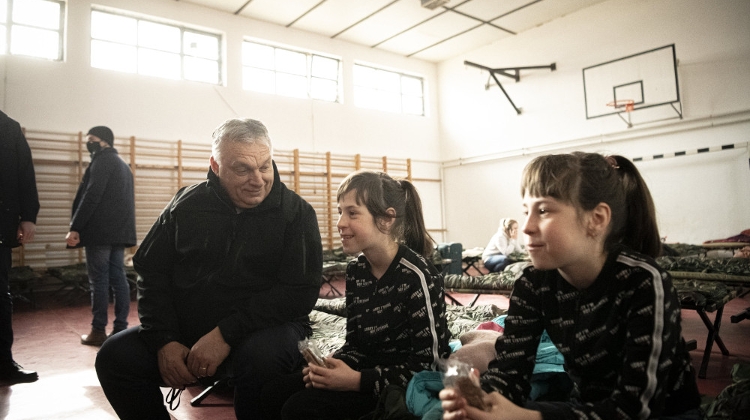 Commenting on the fact that 140,000 people have entered Hungary from Ukraine through the border crossings there, Prime Minister Viktor Orbán said “this was the beginning of this crisis”.

Should Transcarpathia become a militarised zone, the number of refugees will multiply, Orbán told public broadcaster Kossuth Radio on Friday.

Third country citizens — such as Indian, Chinese and Nigerian students who arrived in the past few days — will be transported to Budapest and flown to their home countries, he said.

Regarding Hungary’s stance on defence and military action, Orbán said NATO would protect Hungary “if we are ready to protect ourselves”.

“If a country wants peace it needs to have some power, which could come from two sources: from strength of its own and that of its allies”, he told Kossuth Radio. Without strength of its own, its allies would be reluctant to sacrifice effort and money to defend any state, he said.

He said Hungary’s security was “solid as concrete” and the country was strong enough to ensure its security even without allies. “Disaster could only hit if we lost our mind and get involved in the war”, he said. “No NATO could protect us against our own stupidity.”

Hungary’s Left “has sided with war”, Orbán insisted, and called on Hungarians to firmly reject that reasoning. “Sending troops means that we take part in a war, sending weapons means that whoever those weapons are used against will become our enemy for God knows how many years,” he said.

Allowing transports of weapons across Hungary and “offering convoys crossing Transcarpathia as military targets where the war has not yet spread means that we are luring the war to that area”, the prime minister suggested. Orbán called for “strategic calm” in the current, tense situation, and said “one must keep their hair on and not make chaotic statements”.

The prime minister condemned an alleged remark from the Left suggesting that “Transcarpathia Hungarians are pro-Russian” and insisted that such a statement could mean “the most direct peril” to ethnic Hungarians in Ukraine.

Concerning the upcoming election, Orbán said he had instructed the government that “the national interest and Hungarians’ security, rather than the campaign should be a basis for consideration”.

On the subject of the sanctions against Russia, Orbán said “those closest to the war will suffer most, primarily the Baltic states, Poland, Slovakia, Hungary, and Romania”.

The government is working to mitigate the direct impact of the sanctions, with regard to bankrupt Sberbank, rising energy prices and inflation, he said, but warned against ignoring medium-term risks such as lower than expected economic output in Europe.

“The longer the war drags on, the bigger the problem, that is why supporting peace is the right position for Hungary,” he said.

Referring to the coronavirus pandemic, Orbán declared the fifth wave over and called the situation “encouraging”. He said it could not be excluded that this had been the final wave of the pandemic, but added that health experts were still monitoring trends.

Hungary must look at the war in Ukraine in light of its own interests, as its topmost priority is the peace and security of its own citizens, Prime Minister Viktor Orbán told public broadcaster Kossuth Radio on Friday.

Providing for the refugees fleeing the war in Ukraine is Hungary’s task, “there’s no need to wait for anyone… waiting for Brussels would create serious problems at the border,” he said.

“Brussels is all talk, and nation states are all action,” he added. Insisting that it was uncertain when funding from the EU would be forthcoming, Orbán said “this is our issue, our problem… and Hungary will resolve it.”

Hungary will welcome EU support “whenever Brussels deigns to wake up”. At the same time, Hungary “has been defending the southern border for years and Brussels has not paid a farthing for the [border] fence,” he said.

Some 70-80% of arrivals intend to move on from Hungary, Orbán said. Those staying will need accommodation, food, health care, work and “education for the children”, he said.

Refugees accepted in Hungary will have to abide by the rules applying to Hungarian citizens, Orbán said.

They will be entitled to jobseekers’ allowance for three months and required to find a job at the primary labour market or enter the government’s fostered work programme afterwards, he said.