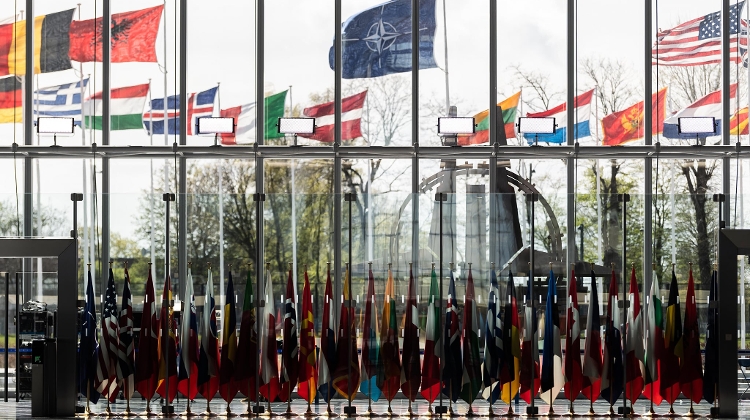 NATO, as an organisation, has repeatedly declared that it is not a participant in the conflict and will not supply weapons to Ukraine, the minister said.

NATO Secretary-General Jens Stoltenberg said that the war had entered a new phase and preparations must be made for a war that could last for several years. NATO members agreed that everything should be done to prevent the war from spilling beyond Ukraine’s borders, he said, adding NATO’s current strategy may have to change accordingly.

“This is not our war,” Szijjártó said, adding that the most important aim was to stay out of the conflict and to advance the swiftest possible restoration of peace. In Hungary’s general election at the weekend, Hungarians expressed more clearly than ever that they want peace and security, he said.

Any transit of weapons across the territory of Hungary would result in direct security threat, and based on the “nation’s decision”, Hungary will not allow direct weapon deliveries to Ukraine, he added.

The NATO meeting concluded with several achievements, Foreign Minister Péter Szijjártó said. Sanctions will not affect crude oil or natural gas supplies, or activities linked to nuclear energy production, which is important for the operation of the Paks nuclear power station, he added. Szijjártó noted that the NATO meeting of foreign ministers was the first attended by the alliance’s Asia-Pacific partners.

After a meeting on Wednesday in preparation for the upcoming NATO summit in Madrid, Szijjártó said a new strategy would be adopted and “set strategic directions for NATO’s policy in the coming years and decades”.

Participants in the meeting agreed that the Ukraine war fundamentally had changed NATO’s focus, he said, adding it was regrettable that “the relationship between NATO and Russia has never been this bad “. Participants agreed that cutting all communication with Russia would be “the greatest disaster” and that “some ties need to be maintained.”

He said he had informed his counterparts about the security challenges along Hungary’s southern borders with regard to 130,000 attempts at illegal entry last year, and said that in future even greater waves of migration could be expected from Africa.

The foreign minister also warned of a possible food crisis arising from the fact that Russia and Ukraine accounted for 15% of all grain exports, which could also increase migratory trends. “This also offers an opportunity for terrorists and activists to hide among the migrants,” he said.

The discussion in the meeting touched upon China, Szijjártó said, adding that “the topic should be handled calmly because cooperation with China offers a lot of opportunities”. He added he had been approached by western companies active in Hungary to convince Chinese suppliers to start production in Hungary.

Speaking on the side-lines of the second day of a meeting of NATO foreign ministers, Szijjártó said Hungary’s energy supplies are secure as Europe and Hungary are facing challenges due to the war in Ukraine.

The government has an obligation to guarantee the security of Hungarians, including energy security, so it will oppose all sanctions against Russia that would hinder the delivery of crude oil and natural gas to Hungary. Nuclear energy is another key element of energy security, Szijjártó said. The nuclear power plant at Paks produces 49.6% of electricity in Hungary and covers over one-third of the country’s electricity needs, he said.

Hungary has managed to obtain all permissions to obtain fuel rods for the plant in an alternative route through air cargo via Belarus, Poland and Slovakia, to replace the original deliveries by rail from Russia via Ukraine which has become “impossible”, he said. The first delivery of fuel rods arrived on the new route on Wednesday, he said.

The European Union is in talks on another set of sanctions against Russia, he said. The Hungarian government sees sanctions impacting nuclear energy supplies as “a red line”, he said. Szijjártó noted the importance of energy independence. The Paks plant is for Hungary a guarantee “to be less vulnerable to world market developments”, he said.