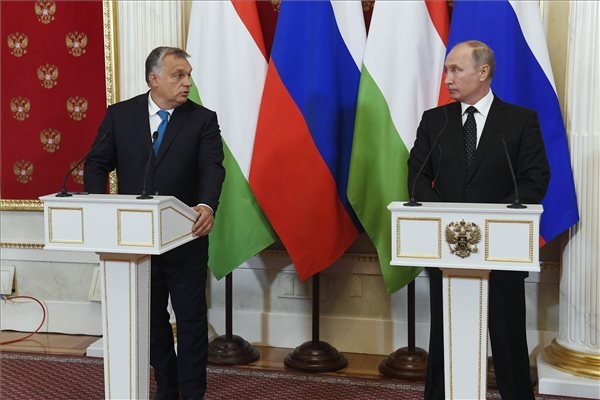 Prime Minister Viktor Orbán said on Wednesday he had telephone talks with Russian President Vladimir Putin and proposed an immediate ceasefire in the Russia-Ukraine war.

Orbán also proposed early talks between the presidents of Russia, Ukraine and France, as well as the chancellor of Germany in Budapest to reach an agreement on the ceasefire.

Orbán said Putin’s response had been positive, but also quoted the Russian president as saying that Russia had certain conditions for a ceasefire, which he should first discuss with his Ukrainian counterpart.

Orbán said Hungary had a special position “on the eastern border of the western world”, adding that Hungary’s experience showed “how brutal wars can be” while “occupation is not such a rare occurrence in this region”.

“We understand this whole thing and know that wars never end as they start, and will become more and more brutal as time goes by,” he said, adding that was why he proposed an immediate ceasefire to Putin.

Hungary has an “uncompromising” position concerning peace because Transcarpathia has over 200,000 ethnic Hungarians and “Hungary has a responsibility for their lives”.

Asked about developments in Ukraine Orbán said “this is a war that Russia started attacking Ukraine, which is aggression”, adding that it was the European Union’s position “which Hungary shares”. He urged an independent and impartial probe into the atrocities, and said the Turkish president also proposed such investigations.

Civilians must be protected and violence against them must be “most firmly condemned”, he said. He warned, however, that “we should not chase illusions” because “neither Russia nor the US recognise the powers of the International Court of Justice in the Hague”.

In his response to a question if Putin asked him to veto European sanctions concerning Russian gas and oil imports, Orbán said Russia was “aware of the situation, in which NATO and EU member Hungary is in opposition to Russia”.

“Therefore the Russians will never ask for anything,” he added. Hungary and Russia have built well-functioning ties “which are now being destroyed”, and which the Hungarian government is trying to save “but the sanctions and western pressure could be so strong that there may be nothing left”, the prime minister said.

Answering another question Orbán said Hungary-Russia ties were “fair”, adding that “the Russians have not deceived us and we have not deceived them once” in the past 12 years. He also added that if Russia wants payment in roubles “it will be no problem for us”.

On another subject, Orbán said the West’s decision not to integrate Georgia or Ukraine into NATO back in 2008 had been “an important milestone in policies concerning Russia”, which created a new border between Russia and NATO.

“Right now they are coming out of the old Russia policy and they don’t know the new one yet; it is not yet know what security system Europe will have,” he said. “The situation must be monitored and analysed, adopting to new developments, and save whatever can be saved,” he added.

Hungary is not planning to expel Russian diplomats, Orbán said, but added that “we will if we have a reason”. Hungary protects its interests well “not only against Russia but against everybody else, too”, he said. The country “will not expel anybody as part of a political campaign”, he said.

Concerning the International Investment Bank, Orbán said Russia had a minority stake in the bank and the government sought to keep it in Budapest.

On the subject of gas supplies Orbán said the question was not what gas cost “but if it is available”. Long-term supply agreements are not aimed at profits but to ensure supplies, he insisted.

Asked whether Hungary would move to protect the ethnic Hungarian community’s members living in the territory of Ukraine in the instance of a protracted war in the neighbouring country, Orbán said “Hungary is a member of NATO, without a NATO decision we will not move an inch from NATO territory”.

Asked whether he believed “in the renaissance of Ukraine as a nation state”, Orbán said “Ukraine exists, we know them, they are Hungary’s neighbours. They are defending their homeland in a tough fight” which the prime minister said was “no surprise”.

“I have always been at the opinion that Ukrainians are good soldiers.” Asked about his “war of words” with the Ukrainian president, Orbán said when there is a war going on, it is not the time to cite the many instances when Hungarians had been a target of attacks over the past years.

“These attacks have put a shadow over the two countries’ relations,” he said, adding that “an intelligent Christian country would not bring such things up in a situation when they [the Ukrainians] are in trouble”.

Asked whether remarks he made on the eve of Sunday’s ballot about Volodymyr Zelensky “were unfortunate”, Orbán said the Ukrainian president “has a bad habit which is that he wants to tell everybody what they ought to do”. “I think it would be better to quit that habit, especially when asking for help,” Orbán said.

PM Orbán Rolls Out Next Priorities

As regards his government’s most urgent tasks, Prime Minister Viktor Orbán stressed the need to establish peace in Europe. The first step towards peace is a ceasefire, which should be followed by a European peace conference, he said.

Orbán said this needed to happen as soon as possible, because “the war is getting increasingly brutal”. He said there was a risk that unless a ceasefire was agreed soon, “the suffering in that part of the world will continue”, and the suffering and problems would get closer to the core of Europe.

Orbán called for urgent measures to be implemented by Brussels to offset the effects of high energy prices. High energy prices are a consequence of the war in Ukraine and will remain so as long as the war continues, Orbán said, proposing the suspension of the EU’s administrative system “irrespective of the purpose of its introduction”.

He also proposed suspending “the complicated system of taxing fossil energy” and the scheme of attaching the price of electricity to that of natural gas. Finally, he proposed scrapping the requirement to blend biofuel additives into fuels.

Speaking in broader terms, Orbán said “a serious economic crisis is unfolding for a number of reasons, with the major one being the sanctions applied on Russia”. “We are going to pay the price of it,” he said.

Orbán stressed the need to handle the European economic crisis, adding that his government would “be able to do that and make every possible effort to protect Hungarian families”.