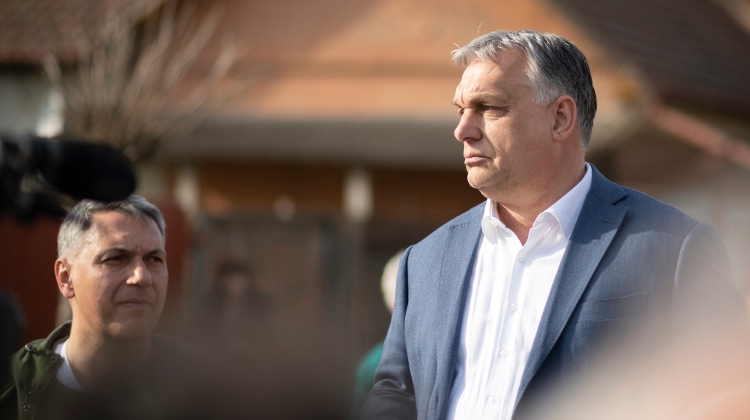 Concerning last week’s NATO and EU summits, Prime Minister Viktor Orbán said the meetings had been about competing strategies. It is clear that there is a group of countries that want NATO to play as big a role as possible in this conflict, he said.

They don’t see a Ukraine-Russia war but Russian aggression against Ukraine that will eventually target the world of NATO, he said, adding that these countries believed it was impossible to avoid being drawn into the war.

The other stance is the one represented by Hungary, which says NATO should not send weapons or troops into the conflict. “Our position is currently the majority view, therefore NATO has decided not to participate in this military conflict,” Orbán said. “It’s not sending troops or weapons.”

“However, if the war drags on — and there are signs of this happening — then this strategic dilemma will keep coming up at every NATO summit,” Orbán said. NATO members will next meet in Madrid in June, he noted, adding that he expected the question to come up again if the war was not over or if an extended ceasefire was not declared by then.

Orbán also said that the Hungarian opposition played a role in international politics even though it was not in power. They have taken a position on the issue and have consulted on it with their international partners, he said, adding that if the left won the April 3 election, Hungary would immediately begin supplying weapons to Ukraine and allow the transit of lethal weapons through its territory.

Hungary would join the group urging NATO to intervene in the conflict, he said. Therefore, the choice between peace and war is at stake in this election, Orbán said, insisting that the opposition posed a serious risk to peace while Fidesz guaranteed it.

Commenting on a letter addressed to him by Péter Márki-Zay, the prime ministerial candidate of the united opposition, Orbán said even in 2010 “when the situation was serious”, his government had chosen not to introduce austerity measures but to restructure the economy.

Orbán said the West’s policies were artificially raising prices while inflation had set in. He said 50% of inflation was caused by Brussels’s “flawed energy policy”. Now the war also factors in “and they’ve decided to impose sanctions”, he added.

“We’ve never agreed with this but for the sake of unity we didn’t thwart it,” Orbán said, adding that the plan to quickly move away from cheap Russian energy further fuelled inflation. He said all of this meant that the European economy needed to be restructured.

The prime minister said he believed the European Union was on the verge of “a very difficult, intellectually very exciting but politically risky period”.

Orbán said Hungary was being accused of being friends with Russia even though “Germany has built a much closer relationship with Moscow” and many French companies are still doing business in Russia despite the war. He said the attacks against Hungary were uncalled for, politically motivated and were aimed at ensuring that the rapid development of central European countries did not pose a challenge to western Europe.

Orbán said cultural alienation was also a factor, arguing that Western countries were wary of certain traditions like national and Christian traditions. Central Europeans don’t see these things as burdens but rather as assets, he said.

As regards the referendum on Hungary’s child protection law held simultaneously with the election, Orbán said at stake in it would be “not to let the fox into the hen house”. “The nature of this gender insanity is that its advocates cannot be taken seriously at first,” Orbán said.

“It is not about a passing fad but about well-organised forces working to promote certain concepts on life,” Orbán said, adding that those forces were “powerful western European human rights NGOs with all the various Soros-backed organisations among them”.

Hungary is a free country where adults live the way they want within the confines of the law, Orbán said. “Nobody wants to force anything onto them, but there must be a red line drawn which is the question of raising children,” Orbán said. It is parents who have the sole responsibility to decide how they want “to educate their children about how to live a happy life”.

Speaking about the Hungarian political left wing, Orbán said their position was clear: “They are aligned with the European progressive left which represents the other side in the growing cultural alienation in Europe”.

They call their approach “Western”, which Orbán said was “mistaken”, arguing that on the issues of immigration, family and the nation, the left wing “is on the others side, not on the side of the Hungarian majority”.

Orbán said the left had an agenda “so markedly different” from what the Hungarian majority wanted that such a gap could not be bridged with a single political campaign. “This is why they need to involve outside resources in an effort to achieve their goal which is to come into power,” he said.

But “outside resources always have their price which, if paid, would cost Hungary losing a significant part of its independence”, he added.

He said it was impossible to find a remedy for the left’s problem, suggesting to them that they should either “change sides, stand on the side of Hungarians and accept at least parts of their majority view on life, or give up their ambition to gain a majority”.

Commenting on the record number of observers assigned by the OSCE to monitor the April 3 ballot, Orbán said: “These Western institutions of peace have become institutions of war”. Their activity, he added, no longer constituted “monitoring” but was instead aimed at “preparing accusations well in advance against political forces who stand a good chance of winning, but whom they don’t like”. “We, however, must calmly answer every question, and because we are right, we must demonstrate this to them.”

Concerning the possible outcome of Sunday’s ballot, the prime minister expressed optimism, stressing however the need to increase efforts in the next couple of days. “The race is not over, turnout will decide the outcome, and anything can still happen,” Orbán said.