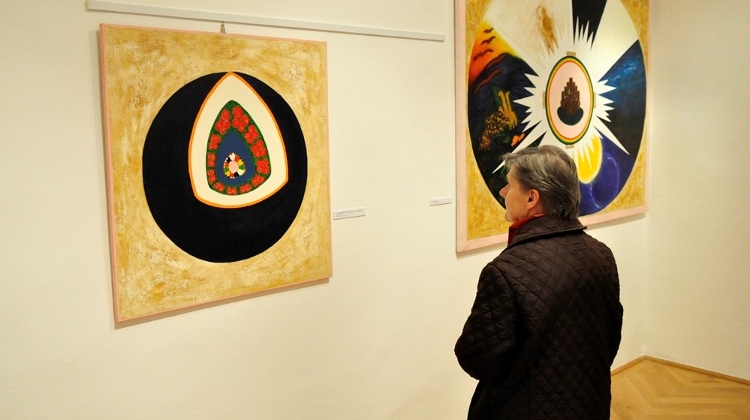 Was on display until 29 May. Tamás Olescher (1954-2021), Munkácsy Prize-winning painter, set designer and performer was a well-known figure and one of the organisers of the Hungarian underground art scene in the 1970s, until he moved to West Germany in the 1980s.

He lived, studied and worked in Frankfurt, where he mainly edited contemporary music programmes and directed theatre, music and dance performances.

He returned to Hungary in 1988 and soon founded the Multi Media Theatre, a cross-genre art collective incorporating visual arts, folk dance, music and video. In addition to his creative activities, he successfully managed the Víziváros Gallery from 1995 until his death.

His early paintings were mostly characterised by abstract expressionism, with figures appearing mainly in his collages. After his return to Hungary, he became increasingly interested in Hungarian folk culture and developed a distinctive, symbolic style.

Throughout his life, he sought transcendental order from chaos to harmony, and his paintings radiate vitality and optimistic faith. The spiritual content of his work is immediately apparent in his clearly composed, richly coloured canvases, which are easy to understand and mostly use traditional symbolism.

His motifs draw heavily on Christian iconography, but also on folklore and symbols of world religions. The most recurring elements in his paintings are the circle, the ellipse, the mandala, the cross, the candle, the fish, the praying hand and various floral motifs.

Tamás Olescher's works can be found in public and private collections both in Hungary and abroad, and our exhibition is primarily a selection from the legacy of the artist, who died last year.