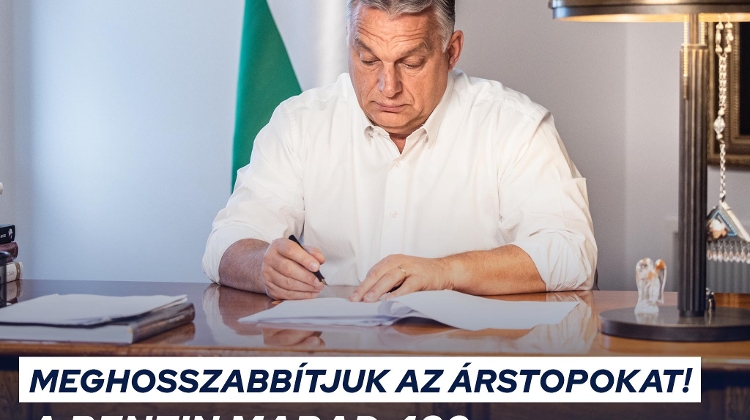 Hungary is extending price caps on food and petrol to October 1, while the loan moratorium and cap on mortgage rates will apply until December 31, the PM has announced.

Orbán said on Facebook that the price of petrol will remain 480 forints (EUR 1.2) per litre.

Also, the prime minister has written to 44 MEPs who recently approached him in an open letter concerning the war in Ukraine, his press chief told MTI.

Orbán expressed support for peace and help for Ukraine but also rejected “remarks that offend Hungary” and sanctions against religious leaders.

The PM said Hungary condemned Russia’s attack on Ukraine’s territorial sovereignty and violation of the Budapest Memorandum. Hungary wants the war to end and for disputes to be settled through negotiations, he added.

Orbán also called for stepped-up efforts to help Ukraine and people fleeing the country. He noted that Hungary had so far accommodated nearly 800,000 refugees, providing shelter, food, medical aid and schooling for children as well as jobs for adults.

Tens of thousands of Hungarians have opened their homes to refugees, raised funds or worked as volunteers, while the government sent money, food, fuel and medicines to war-stricken Ukraine, he said.

Hungary “Deserves Appreciation and Gratitude Rather than Offensive and Lecturing Remarks”, Says Orbán

For all its efforts in support of Ukraine, Hungary “deserves appreciation and gratitude rather than offensive and lecturing remarks”, the prime minister said in an open letter.

The Hungarian government protects religious freedoms, so it will never support sanctions against church leaders or isolating them from members of their church, Orbán said, adding that peace could not be achieved without the active participation of churches.

Orbán also said the Hungarian government had done everything to support the six sanctions packages approved so far in the interest of European unity.

Hungary backed the sanctions even though it became increasingly difficult to maintain the earlier consensus that the sanctions should not hurt the EU more than they hurt Russia, he said.

Orbán noted that the European Council takes unanimous decisions under the bloc’s basic treaty, so there a decision cannot be made without consensus. It would therefore be wrong to refer to a veto.

Orbán said that in the interest of Europe he reserved Hungary’s right to fight proposals that went against common sense and threatened the impoverishment of Hungarian and European families.

The PM said he was certain that he would find “more and more partners” among his letter’s recipients in this endeavour. This is not only in the interest of Hungary but in Europe’s interest, too, he said.