Car Industry Output in Hungary Up 13% in First Seven Months Of 2022, According to Szijjártó 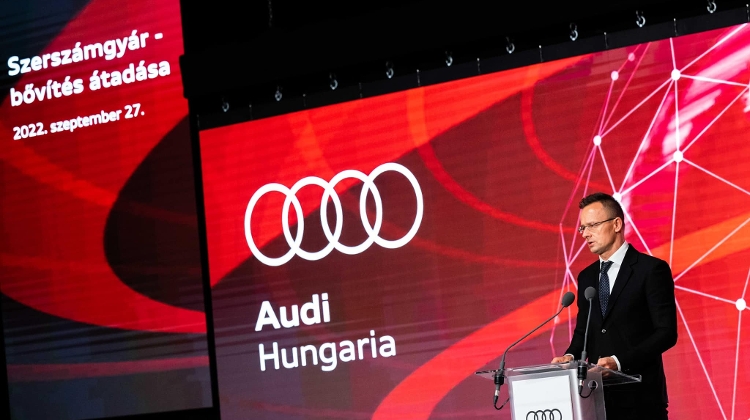 Output of Hungary’s automotive industry rose by 13% to 6,600 billion forints (EUR 16.2bn) in the first seven months of the year, the minister of foreign affairs and trade said, adding that there was a “realistic chance” that the sector’s output could reach 10,000 billion forints “in spite of the recession environment”.

The expansion has increased the base’s exclusive series production capacity by 30%, he added. Output of Hungary’s automotive sector came to 9,300 billion forints last year compared with 3,600 billion in 2010, Szijjártó said.

The sector employs 150,000 people, with 90% of its output produced for export, making Hungary the world’s 19th largest auto exporter, he added.

Germany is Hungary’s biggest trading partner, he noted, adding that bilateral trade turnover came close to 60 billion euros last year. “Looking at the figures from the first half of this year”, trade turnover in 2022 could exceed last year’s, he said.

German businesses remain the biggest investor community in Hungary, employing some 300,000 Hungarians, Szijjártó said. Hungary’s economy grew by more than 6% in the second quarter of the year, thanks in large part to the government’s pandemic response measures aimed at preventing unemployment, Szijjártó said.

He said Europe was threatened by “deep economic recession”, and the continent was also facing a security crisis. But Hungary, he said, had been “facing different crisis situations practically for 10-12 years”, adding that the country had emerged stronger from every difficult situation.

He said Hungary’s responses to the various crises had always differed from those of the international mainstream and had focused on the enforcement of national interests.