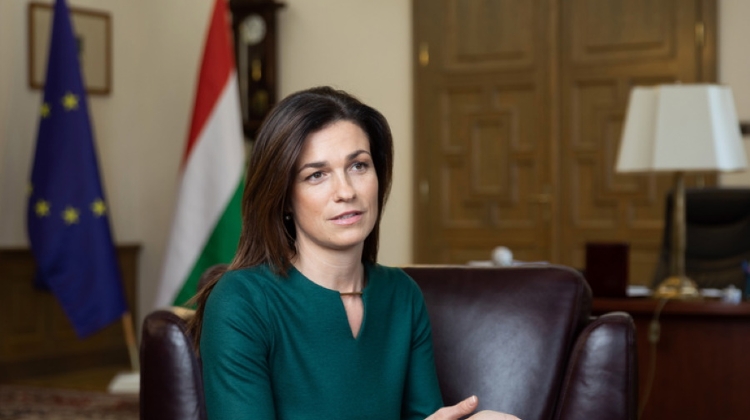 In the event that the government fulfils the commitments it made to Brussels regarding the conditionality mechanism linking EU funding to the rule of law, the procedure may be ended before the end of this year, allowing Hungary “to step into year 2023” without losing any funding, the justice minister told lawmakers.

Judit Varga addressed a debate on a government sponsored package of proposals related to the conditionality procedure in the opening session of parliament.

The minister said months of difficult yet constructive talks concluded between the government and the European Commission successfully on Sept. 18, with the commission indicating that the 17 amendment proposals submitted by the government were fit to tackle concerns over which the EU’s conditionality procedure was launched.

The government attended the talks “in the spirit of mutual respect” and aimed to reach an agreement under which Hungarians would “get the funds they are entitled to” while avoiding “inconsistent compromises on issues concerning which Hungarian voters had expressed their opinion in the April election and referendum, as well as in previous National Consultation surveys.”

Those principles were fully promoted during the talks, she said. The Hungarian government will “continue to protect children, reject illegal migration, and resist any ill-advised or unsound sanction policy that hits Europe more than its target”, she said.

The commissioners’ decision passed on Sept. 18 will facilitate fast conclusion of the talks, she said. Once the Hungarian government meets the commitments it has made, the conditionality mechanism may be terminated before the end of the year and “Hungary could enter the year 2023 without losing out on funds,” she said.

The Hungarian government is committed to the EU’s fundamental values and to promoting the community’s financial interests, but it has serious legal reservations concerning the procedure and the EU legal mechanism governing it, the minister said.

The government also has serious legal concerns the way the commission has acted “solely against Hungary for obvious political reasons”, she added. The procedure launched against Hungary is a “test” for all EU members, “not because of the way it was launched; rather its termination could be an example for constructive dialogue, a symbol of the European motto ‘Unity in diversity’ and of real solidarity,” Varga said.

The government’s measures aim at “building a bastion of extra guarantees” around public procurement and reinforce the legal and institutional framework of the fight against corruption, as well as conflict-of-interest rules, she said.

The government has agreed to pass 90% of its package following broad consultations. Under the new measures, the Government Control Office (KEHI) each year will publish a public report on whether social consultations pertaining to draft legislation has taken place, and if not, whether the lack thereof was owing to a failing in the law, she said.

Under the new measures, the authorities will not be allowed to charge fees for allowing access to information of public interest, while special restrictions on the publication of such information under a state of emergency will also be removed, Varga said.

The minister noted the planned launch of an Integrity Authority, to be established in the second half of November, and an Anti-corruption Team, composed of government and civil sector representatives.

The new measures will introduce special procedures to deal with major crimes concerning public assets, allowing a court review if the prosecutor or investigative authorities reject a criminal complaint, she said.

She added that under the new measures the national tax authority would support the EU’s anti-fraud office (OLAF) in the latter’s on-site investigations in Hungary.