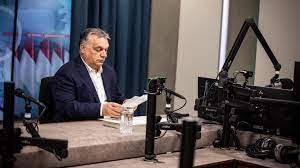 Prime Minister Viktor Orbán said the government is working to push inflation into single digits by the end of 2023, adding that high prices were driven largely by sanctions imposed in response to the Russia-Ukraine war.

This is why the government is planning to introduce further price caps in the coming weeks, he told public radio.

Among anticipated the measures, interest on business loans will be capped at 7.7-8%, the prime minister said, adding that banks will have to absorb the related costs. Interfering with a complex economic system “is never good” but necessary to handle certain types of crisis, Orbán said.

Concerning the war, the prime minister said he expects calls in the European Union for a ceasefire and peace talks to grow.

“Hungary is inhabited by sober-minded people,” he said, adding that this was what Hungarians had been calling for from the start.

The prime minister said the latest National Consultation public survey on sanctions imposed in response to the Russia-Ukraine war “is important to help everyone realise we are all in danger”.

Orbán said tensions at last week’s EU summit had run high, and the demand for peace was growing in all countries. “Common sense will prevail sooner or later,” he said.

Orbán said wars could end only with an agreement between the warring parties.

“Taking the war to its conclusion would prolong it for years to come,” he said. The prime minister said the “pro-war West” would have to foot the bill for rebuilding Ukraine and running the country.

“The talk is of unimaginably large numbers,” Orbán added. “Even before the war, Ukraine couldn’t make enough money to fund the cost of living of the Ukrainian people,” he said.

Orbán said Ukraine would need around 5 billion euros a month to avoid a collapse, adding that the question was who would give them this money. Talks are ongoing about how the burden should be shared by Europe and the United States, he said.

The discussions are also focused on how the burdens should be distributed among EU member states if Europe contributes to aiding Ukraine and whether even everyone wants to contribute, he added. Hungary will have to decide whether to participate in that process, Orbán said.

Hungary is facing difficult decisions, including “whether we have money to give to the Ukrainians, and in what form we should give it: together with the others, separately, as a donation or a loan”, he said. This will only become clear over the next two to three months of EU talks, he added.