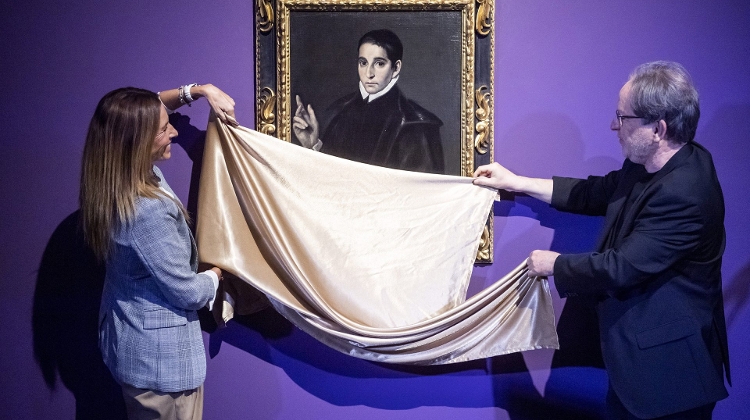 Now on until 19 February 2023. A large-scale exhibition presenting some 50 autograph paintings of Cretan-Spanish master El Greco opened in Budapest’s Museum of Fine Arts.

Featuring altogether 70 works, it is the first comprehensive exhibition on the oeuvre of El Greco (1541-1614) ever organised in Budapest, László Baán, the director of the museum, said at the opening.

“This show has been long overdue also because the Budapest Fine Arts Museum’s collection preserves the largest number of El Greco paintings in Europe after Spain,” he said. Baan noted that the newly acquired title, “Portrait of Saint Aloysius Gonzaga”, one of the first pictures El Greco painted after arriving in Spain, is also on display.

Purchased at a Christie’s auction in June, the oil-on-canvas has been added to the five El Greco paintings preserved in the museum’s exceptional Spanish collection. János Csák, the minister for culture and innovation, told MTI that more than 40 titles are on loan from public, private and church collections in Europe and overseas.

Leticia Ruiz Gomez, curator of the exhibition, said the first painting visitors encounter is Saint Sebastian, which was “an excellent allegory of Greco’s life and the exceptional journey that took him from Crete through Venice and Rome to Spain”.

The exhibition will run until February 19.

More about the exhibition:

The exhibition seeks to present an all-embracing overview about the oeuvre of El Greco (1541–1614), one of the foremost masters in the history of European art, while allowing an insight into the full complexity of forms he applied and his astounding stylistic development.

The Museum of Fine Arts – whose exceptional Spanish collection preserves the most works by El Greco in Europe after Spain – will host the first large-scale Hungarian exhibition devoted to the master, thus settling a long-term debt to the public.

Besides featuring El Greco’s oeuvre, the exhibition seeks to evoke the environment in which the master lived, studied and worked in an attempt to provide the context for how he drew on the various influences, such as the teachings of Italian masters and the models he adopted, and how he built them into his works.

The exhibition will also feature works by two of El Greco’s closest followers: those by his son, Jorge Manuel Theotokopulos, and those by Luis Tristán.

The eighty or so pieces, including more than forty autograph masterpieces will allow visitors to gain a comprehensive insight into El Greco’s unrivalled art.